When the boy inevitably grew up, married and moved away with his own growing family, the toymaker decided to make a girl. He did it this time in secret, afraid of what his neighbors would think, fearing the potential unjust accusation of prurience when all he wanted was someone he could talk to, whose conversation would eradicate the heaviness of his solitude.

He worked at night, carving wood with his spotted hands by the feeble light of low and fat candles he favored from his youth, recalling how he watched his grandfather shape magic from wood and humming a song whose words he had long forgotten. He worked from midnight until just before dawn for five weeks, struggling with the impatience that old men with erratic memory suffer, losing himself in the methodology of his craft, shaving wood to reveal the delicate limbs and the small torso of his waiting daughter. Then at last he reached the part he liked best: shaping the girl’s face, determining the contour of her cheeks, the ridge of her brow, the curve of her chin, the hollow of her eyes. For her hair he chose the color of burnished bronze, planting and pulling the strands in and out of her hard scalp. For her eyes he selected the color of the bluest sky, fitting the glass spheres with a precision that only a master toymaker possessed. Just before he finished, he covered her polished nakedness in muslin and lace, cutting and sewing the sleeves and the hems and the ruffs, just as the sun came up.

The toymaker straightened up and grimaced at the creak of his aching back and looked at his new daughter, reaching forward to gently put an errant lock back in place.

“Now we must be patient, you and I,” he told her. “If my son could come to life, then certainly so can you.”

With all the gentleness his trembling hands could muster, he lifted her from his worktable and set her down on the low shelf where the boy came to life one memorable night many years ago. He blinked once against the memory, then left to make four dainty pillows from the scraps of the materials of her dress, to arrange around her and arrest her fall should she awaken early.

He went through his day as if it were any other, busying himself with small toys that no one wanted to buy. He had lost an entire generation of children who grew up without knowing him or his work, since he stopped working to raise the boy. But he did not care about any of them. He took pains not to look at the low shelf where his new daughter sat, half-convinced that he would confound the miracle of life.

He cooked some oatmeal late in the day when he realized that he was hungry. He stood over the pot on the stove and stirred the thickening meal with little interest. When the boy lived with him, oatmeal was not an option. The toymaker’s larder had been stocked with hams suspended from the ceiling, as well as dried and preserved fruits in glass jars, honey in slender honeycomb sticks, and sacks and sacks of sugar, for the boy loved sweetness as much as the toymaker loved him. He hoped his new daughter wouldn’t miss sugar, as he had not bothered to replace the last empty sack.

He sat at the kitchen table and spooned hot oatmeal into his mouth, barely grimacing at the heat, listening to the relentless whirrs and ticks of the kitchen clock. He put down the spoon and realized with a start that he was sitting in darkness.

With barely concealed excitement, he stood up, leaving the cold bowl on the table, and made his way to the room with the low shelf, stopping only to light a candle and pocket another one. He did not want her to be afraid. He wanted her to see him in light. When the boy came to life, the first thing he did was to scream. That was the terrified wail that shook the toymaker from his sleep, and he remembered spending many hours comforting the boy.

He stopped at the door and craned his head toward it, trying to listen for the slightest whimper, the littlest cry. Hearing none, he opened the door and rushed to the low shelf to comfort his new daughter, thinking that perhaps some children greeted evening with disregard, because they simply did not know yet how to be afraid. She would need him, regardless, for he believed that every good father was a guardian against things unknown, though he knew there were things that no one could guard against.

The toymaker knelt by the low shelf and brought the candle close.

“Daughter,” he spoke the word as both question and affirmation.

The doll’s blue glass eyes caught the candlelight, and for a breathless moment he thought the miracle had come to pass. But when she did not move, long after he had expelled the air he contained in his chest, he knew he had to wait a little while longer. The boy, after all, with his unforgettable terrified wail, came to life in the long hours of the night.

He sat on the floor and watched his new daughter by candlelight. He thought about the best years with the boy and imagined all the possible mistakes he had made raising him, and all the possible solutions and corrections.

He thought about his propensity to praise the boy for every little thing – yet he could not completely blame himself for the daily amazements of his living, breathing miracle. Certainly no one would begrudge him that. But he knew deep within that too much kindness had the quality of watered-down sweetness. He promised himself he would not be too kind to girl, that he would be firm and resolute against the decay of love and respect, that he would raise her to be obedient and respectful and gentle and loving. But not too loving, for too much love only had the inevitable effect of diminishing itself over the course of the years, and he did not want that. He planned to love her in precise measures, no more, no less. That way, she would stay.

But part of him rebelled against the ghastly logic of withholding affection. He believed he should be able to create for her the most wondrous toys. In his mind was the plan for a dollhouse unlike any that any child had seen, the size of half a real house with miniature furniture and running water. And that would be only the first thing he’d build for her. He would plant a diminutive garden for her, populated by the smallest flowers he could find. Then a working carriage with clockwork horses, then a model of the world circling around the sun, then he’d figure out a way to make the distant stars twinkle for her even in daytime. And he would talk to her about anything that interested her, and he’d listen gravely to her every word, for it was important that she felt important. He’d guide her and protect her and give her everything that was love’s due, everything that was love’s right.

The toymaker woke up with start, for a moment disoriented by his abrupt transit from dreaming of laughter to the feel of cold hard floor on his cheek. In the dark of the room, he thought he heard someone draw in a breath. Realizing that it was the sound of his own inhalation, he reached for the extra candle in his pocket and forced his trembling hands to light it, replacing the exhausted one in the candleholder.

He drew closer to the low shelf, his lips in a helpless smile of anticipation, but saw nothing different in his daughter’s glass eyes. He bit back his disappointment and rose to his feet to check the time.

He stared at the clock on the wall. It was well past midnight. Anger at his ineptitude washed away the displeasure, and he hurried out of the room, banging his leg against a chair as he reached for the door. Only when he was out of the room, with the door securely closed, did he give in to the beginning of tears, distressed by the terrible possibility that his very presence near the low shelf had deprived whatever agency of the privacy it needed to work the miracle.

It was an hour past dawn when the toymaker entered the room again. He had spent the small hours of the incipient day in darkness, ignoring the gloom that conquered the solitary candle he’d lit past midnight.

On the low shelf, nestled against four small pillows, was his new daughter, her blue glass eyes unblinking.

The toymaker reached down and took her in his arms, opened the door to the hallway and climbed the stairs to the attic. Crouching low, he walked past boxes of old toys he’d all but forgotten about but did not possess the heart to simply discard.

He made his way to a hardwood chest, one of several, and opened it. He placed the new daughter in his hands among the other new daughters, closed the lid without a word, and went back downstairs, stopping only once to rub at his painful knee.

“The New Daughter” is from Dean’s latest collection, A Field Guide to the Roads of Manila and Other Stories. 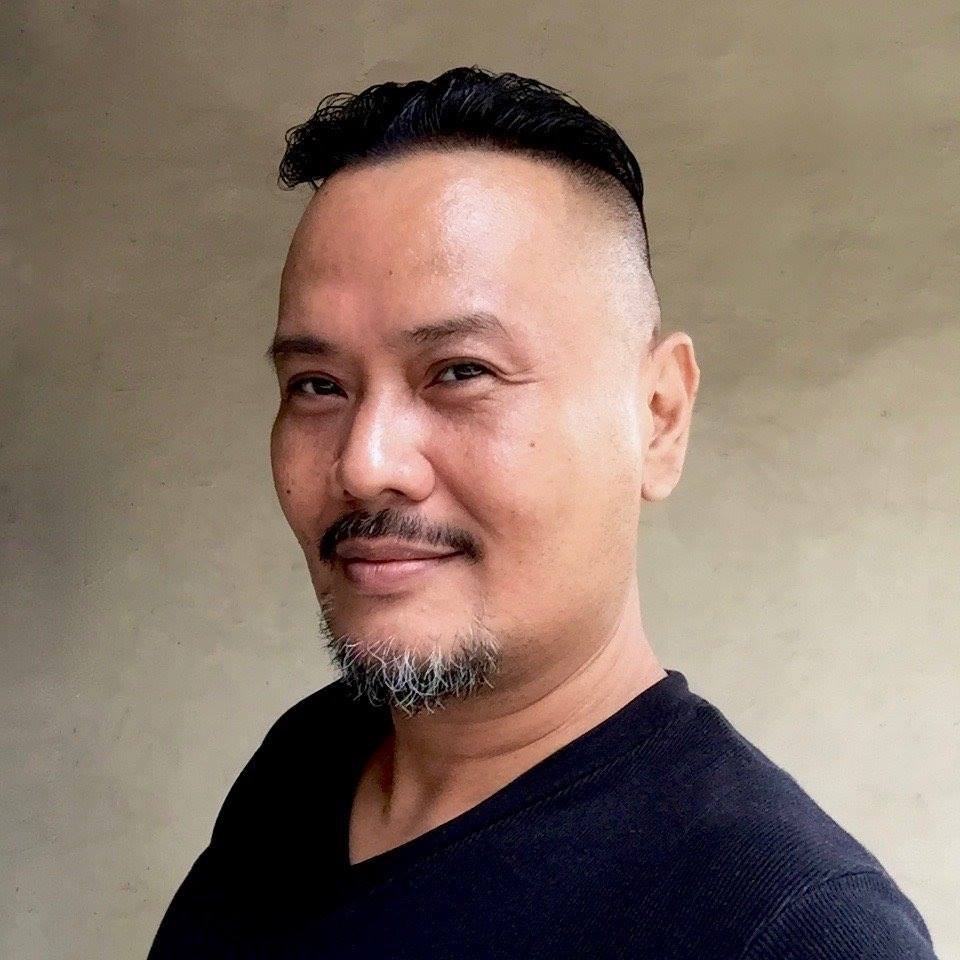 Dean Francis Alfar is a Filipino writer and advocate of speculative fiction. His stories have appeared in The Year’s Best Fantasy & Horror, The Time Traveler’s Almanac, and the Exotic Gothic series, among others. He is the author of a novel and three short story collections.  He is the founding editor of the Philippine Speculative Fiction annuals, now in its eleventh volume. Dean lives in Manila with his wife and tango partner, award-winning fictionist Nikki Alfar, and their daughters Sage and Rowan.