The wyrm always looked like a bird
from far away, but a bird doesn’t turn
its long neck and writhe in mid-
air to arrow toward its prey,
doesn’t gut a man with one stroke
of a single sword-sized talon.

Early in spring something made it rise
from behind impassable peaks. The green
scent of new grass, a patch of sunlight
regilding golden scales, the gush
of thawing glaciers—who can say?
The ancient stories were all the same.

It would come searching, back and forth,
back and forth, a woven pattern born
from desperate hunger. Dancer of the skies,
it could only manage ungainly hops
on the ground, said the lone survivor
of the last farmstead it had robbed of its folk.

Meanwhile, we waited for warmer days,
huddled in the dark, bowed our heads,
patient as buds sleeping under snow-sleet.
We prepared our crocus-tipped spears.
Those children too small for spears
drew straws. We did not tell them why.

When sentinels saw a speck against clouds,
we set the raft afloat on the black mire
of pitch we used for making torches.
They sang bravely but did not watch the sky—
the boy who had been chosen, the girl
who would not let her brother die alone.

We told her many would go with them.
We had offered them strong ale, and cakes
made with what was left of the summer honey
and the juice of poppies, but they refused,
and we hid among the rushes. The blades
of our spears gleamed like new leaves in spring. 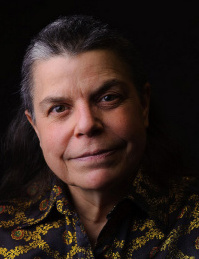 F.J. Bergmann writes poetry and speculative fiction, often simultaneously, appearing in Analog, Asimov’s SF, Abyss & Apex, and publications beginning with other letters of the alphabet. Bergmann edits poetry for Mobius: The Journal of Social Change (mobiusmagazine.com) and is the managing editor of MadHat Press. A Catalogue of the Further Suns, a collection of dystopian first-contact reports, won the 2017 Gold Line Press poetry chapbook contest.