Chronology Of Items Found On The Moon

Chronology Of Items Found On The Moon
Mary Soon Lee

November 17, 1990 (Shuguang 16)
an icosahedron made of element 164;
an astronomical clock
displaying the positions
of the Earth, Moon, Sun, Saturn. 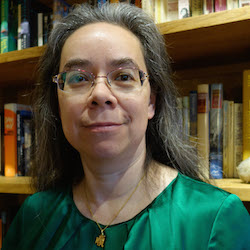 Mary Soon Lee was born and raised in London, but now lives in Pittsburgh. She writes both fiction and poetry, and has won the Rhysling Award and the Elgin Award. Her book "Elemental Haiku," containing haiku for each element of the periodic table, has just been published by Ten Speed Press. Her website is http://www.marysoonlee.com and she tweets at @MarySoonLee.