My grandmother’s only friend in the 55+
apartment complex is Marilyn, who lives next door to her
on the third floor.
The two of them never leave their units. They
lean out, reckless as teenagers, over their balcony
railings to talk, smoking slims.

Marilyn reads my horoscope.
A Capricorn, but there’s a halo
stuck on those horns.

When I tell Mama, she says who?

The dancer, the singer, I say.

The one getting chemo?

Mama has a lot to say then about the
sheep and the goats.

Before I understand horoscopes,
I think I am the former.

It’s Marilyn who tells me sheep are goat-heads too
without the whipstitch that’s a dog.

There are no dogs in the horoscopes, I say.

Ah. But there are in church.

Marilyn makes white woman jokes about her
lungs. Tar babies she calls them. I’m not sure
if she means their blackness or that her
lymph nodes and her liver have got their hands in it.

Marilyn dies.
My grandmother moves out of the 55+ apartments
into an assisted living, where
Mama says she’s trouble, butting heads with staff.
she begins insisting on climbing non-existent stairs
to her room on a non-existent third floor. She screams and sobs
at the CNP with the platinum bob she keeps
calling Marilyn 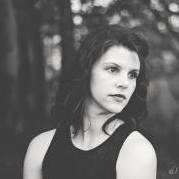 Laura Page is a graduate of Southern Oregon University and editor in chief of Virga Magazine. Her work has appeared or is forthcoming in Rust + Moth, The Fanzine, Tinderbox Poetry Journal, Kindred, The Minola Review, and others. Her chapbook, "Sylvia Plath in the Major Arcana," is forthcoming from Anchor & Plume.