The Collected Poems of Bruce Boston: Dark Roads and Brief Encounters With My Third Eye 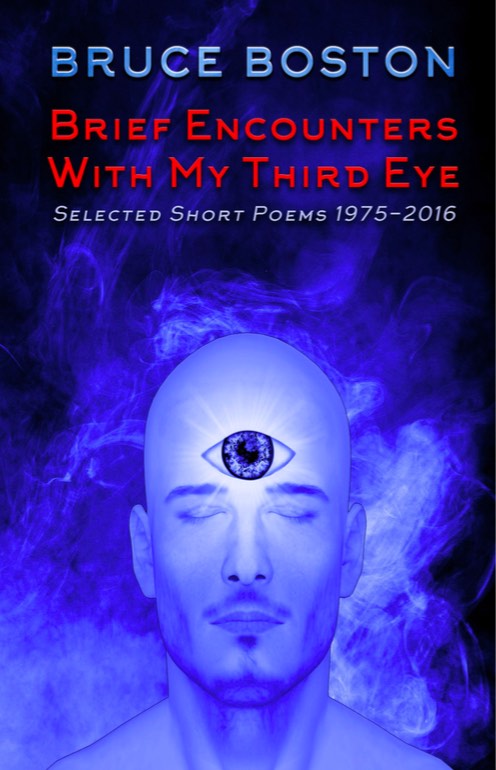 Bruce Boston’s poetry is “a cyberglyph of a language / composed of… lightning exclamations” that reveal the ferocity of existence, emotional and literary, under close, (re)invigorating examination. [1] In these two volumes of collected poetry spanning nearly five decades of a stellar career punctuated with dozens of books and multiple awards, we find the best of speculative poetry from the grandmaster, one of the brilliant minds to emerge in the wake of the beatnik generation.

He formed phrases like freshly bought
candles, their wicks still clean,
calling them sutras rather maxims
since he like the eastern flavor of the
word:

“breath falls from the lungs and is not caught”
“it takes more than two legs to leave”
“the rain does not choose the forest or the plain.”

The opening poem of Dark Roads: Selected Long Poems (1971-2012), “The Tiger Does Not Know,” is infused with the allure of eastern mysticism. And Brief Encounters With My Third Eye: Selected Short Poems (1975-2016) could be a title of a book from within the Hindu cosmology. The revolutionary pathos of the 1960s pervade Boston’s early poems: the psychedelic contours of the Hippie generation, its groovy musical box, promiscuousness and drugs. “Confessions of a Body Thief,” one of the most popular of these poems from Boston’s vast and enchanting oeuvre, is also perhaps an excellent example of a speculative poem for a non-SF reader.

Wielding my axe like a pen,
and often like a sword,
I defined a shaggy credo,
my generation’s song…
I lived my life so rapidly,
losing track of night and day,
the drugs within my veins,
time bunched and crushed
together like the jackknifed
cars of a derailing train.
When my body overdosed
I abandoned its dying shell.
After one or two false starts
I settled on my second host.
I became a cybernetic genius,
worked for IBM and Rand.
I calculated decimal points
to infinity and back again.
I’d never mastered logic
and never cared for math,
but I had another’s brain
and a Ph. D. from M. I. T.
to think in algorithms
and converse with binary.

Confessions of a Body Thief [2]

Born of Catholic and Jewish heritage in 1943 in Chicago, Boston grew up in an era of rock and roll, the Cold War, and the Space Race in Southern California. He graduated from the University of California, Berkeley, “while active in the psychedelia and political protests of the 1960s,” and lived in the San Francisco Bay Area until 2001. [3] When he entered college in 1961, his “ ‘life plan’ at the time was to become a mathematician and write science fiction novels on the side. [4] Soon he would give up math, but not the dream of becoming a writer. He has written two novels, eight fiction collections, and hundreds of poems. His story “Broken Portraiture” brought home his first award—a Pulitzer Prize for fiction— in 1976; he would not win another award for nearly a decade.

What if gravity changed like weather? What if aliens have come and gone from our planet like tourists? As high-wired and puzzling his poems and stories may appear at first glance, today Boston’s long and short works are mandatory reading for any young poet who must traverse the expanse of science fiction, fantasy or horror. There is much to note and celebrate in his remarkable corpus: the incisive precision of his language; the interplay of surreal and scientific ideas and objects; the imaginative leap and emotional depth of his subjects and characters, human or otherwise.

The short poems from a series that won him two of his seven Asimov’s Readers’ Award, “Curse of a Shapeshifter’s Wife” (1993) and “Curse of a SF Writer’s Wife” (1997) make fun of the male, and the absurdities of his chosen vocation, in an unequal relationship. Here the poet isn’t afraid to ridicule himself, or his counterpart. He inhabits the women’s point of view as easily as he inhabits a shapeshifter’s or an automaton’s. The nuanced and feminist portrayals of the bond of allegiance, often by choice, become utterly moving.

Boston’s poems that are most successful in these two volumes posses a powerful emotional chord and pyrotechnic rhythm; poetry that dazzles readers with their out-of-the-world visuals, and masterful poise, and a playful tone that barely masks a deep sense of irony, loss and despair. His wit and his heart are on display here, and if they make him all the more endearing to a reader, it is by his own design.

Five of Boston’s Rhysling Award-winning poems appear in Brief Encounters: “For Spacers Snarled in the Hair of Comets” (1985), “The Nightmare Collector” (1987), “Spacer’s Compass” (1994), “Future Present: A Lesson in Expectation” (1995) and “My Wife Returns as She Would Have It” (2001). He builds upon the social commentary of his poem, “Future Present: A Lesson in Expectation,” into a memorable “Confessions of a Body Thief”—a Rhysling winner (1999) collected in Dark Roads, which also collects “In the Darkened Hours” (Ryshing Award, 1988).

Of these award-winning poems, “In the Darkened Hours” and “My Wife Returns as She Would Have It” are deeply moving and profound without appearing as such. His sense of loss, physical and emotional, and an enduring sense of love captured by a fleeting butterfly— which the poet wonders might be a reincarnation of his wife—this is what I have come to expect from the finest poetry, and Boston has produced many. These poems often blur the lines between literary and speculative. That doesn’t mean he isn’t aware of the many differences between the two forms:

Mainstream poetry deals with the rendering and exploration of the here and now, reality as we know it, internal and external… Speculative poetry has more to do with imagination, the world of dreams and the world as it could be… Like speculative fiction, speculative poetry often poses and answers the question: “What if?”… My work covers a wide range, from what some would consider doggerel to what others might dub literary esoterica. Yet the bulk of my poetry remains speculative, either in content and stance, or in its attempts to experiment with language and form. [4]

Ultimately labels are futile for a poet, literary or speculative. The last lines from his poem, “Spacer’s Compass,” seems to me the perfect definition of a poet like Bruce Boston, his life and work: