I wonder who christens hurricanes,
announces their birth at the moment of
landfall,
the eye travels at walking speed.
I watch the world end in climbing graphs
and deserts of water,
you can’t build an ark when you’ve
already cut all the trees down,
can only watch as the sea rises to swallow us all (?)
whole for our (?) transgressions,
burning bushes have become burning forests,
burning cities, but nobody’s listening –
clouds come bearing death and (in shrinking
doses) life.

The rich build towers to the sky,
harpoon the clouds and tow them to their
vineyards, keep them on short chains so they
don’t get it in their cotton minds to wander.
Tend to their (bulletproof) glass-walled oases
so they can enjoy the world’s last coffee beans
with foreign dignitaries,
nobody watches the news now.

Only the weather, 24-hour and weekly forecasts,
checking the chance of rain like they’d
check football scores,
they build bunkers for tornadoes
and platforms for floods,
expedition teams on standby if,
God forbid, they have to be dug
out of the rubble,
fireproof and lightning-proof and shatter-proof
everything, a vanilla bean costs more than a private jet,
not that anyone flies anymore, other than
the poor sap bringing over the vanilla beans,
but somebody’s got to do it, and most

everyone’s sick, other than the mosquitoes and rats and ticks
that grow fat in the wastelands, and all of the antibiotics have
stopped working, other than those the labs save lovingly
for the rich, because a secret’s worth nothing if everybody knows
it, and at least they’ve got their air filters and potable lives,
and deep pockets to fill with your compassion,
and at least they won’t be dead of cholera in three months.

Their lawns are indoors now, and you can tell just how rich
they are by how real the grass is, how much water the gardener
mists on it, always on the verge of tears, how recklessly they play
croquet or golf or polo on the perfectly beheaded blades,
how much emerald-green stains their white tennis shoes,
white khakis, polos, knees.

Security’s still paramount –
people are much more prone to looting
when they’re dying, people have always been
bitter and wanted what they can’t have,
whether that’s water to drink or air to breathe,
let alone food to eat that isn’t poisoned,
run red, run black, run brown, with smoke from the
factories that made the rich,
but they’re just as easy to gun down
as always, forced to scatter to the toxic
winds,

forced to make do
as the poor (as we) always do. 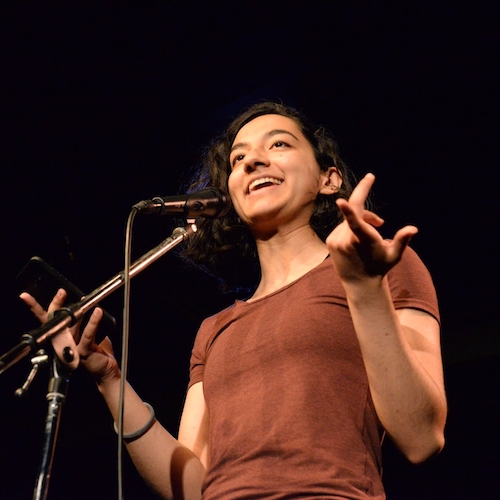 Qurat Dar is an engineering student at the University of Guelph and an emerging author and spoken word artist. She has work currently in Augur Magazine, The Temz Review, and Anathema Magazine, among others, and is a Best of the Net finalist. Qurat is currently part of the Art Gallery of Mississauga’s EMERGENCE artists’ collective, and won a 2019 Ron Lenyk Inspiring Youth Arts Award. She was also recently a finalist in the 2018 Canadian Festival of Spoken Word (CFSW) and the 2019 Canadian Individual Poetry Slam (CIPS), placing 4th and 6th in the country, respectively.