WRITE FOUR LINE ANSWERS TO THE FOLLOWING QUESTIONS: (5 marks each)

I. Why was the term ‘Mother Earth’ used across literatures?

III. In Hindi and Tamil literatures ‘patal’ and ‘paathala’ respectively refer to the underworld. What kind of creatures were said to inhabit these areas?

III. Why was the Rig Vedic Vak Devi, Goddess of Articulation of All Life, implored to ‘let the hem of your skirt sweep over me’?

IV. Why is light associated with revelation in all literatures?

V. ARE THE FOLLOWING STATEMENTS TRUE OR FALSE: (15 marks)

VI. CHOOSE ANY TEN PHENOMENA THAT STILL EXIST AND TRANSLATE THESE INTO A CONTEMPORARY INDIAN LANGUAGE. (20 marks)

VII. WHAT SIGNIFICANCE DOES THIS POLITICAL POEM OF THE21ST CENTURY HAVE TODAY? (15 marks)

Make me dew that touches all
without distinction.

Like snow-flakes let my perfect structures yield
to the melt of being.

As an underground river flowing during drought,
make me draw from secret sources.

Sweet and salt, estuarine,
let differences mingle in my blood.

Tidal courage, I call upon you to return after the ebb:
Spirit of water, give me hope.

Print on me oceans covered with sky;
when fiery fissures open, remind me of life.

Fill my marrow with glacial ice that cuts
rock to nourish springs.

Add one more wish to this:
Make me a mountain lake,

calm and deep,
that reflects light.

VIII. WHY DO YOU THINK CLIMATE BREAKDOWN CAN STILL BE REVERSED? GIVE SIX REASONS REFERENCING MULTISPECIES ETHNOGRAPHIC LITERATURE. (30 marks)

* “Invocation: Spirit of Water” by Priya Sarukkai Chabria was first published in Dialogue and Other Poems (Indian Academy of Literature Golden Jubilee Imprint, 2005). 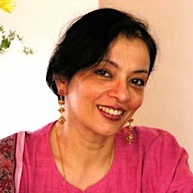 Priya Sarukkai Chabria is a writer, poet and translator. She has written several books, including Clone, Dialogues and Other Poems, Not Springtime Yet, and Generation 14. She is the editor of Poetry at Sangam.