Indra Das: “The artist’s job is to provide the seed for an infinite tree of branching meanings, all flowering inside the hive mind of a collective human audience.” 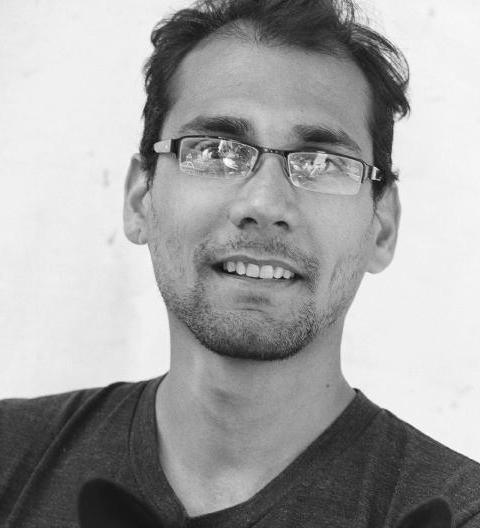 What do you prefer: Kolkata or Calcutta?

I have no preference. They’re ultimately not that different, and I kind of like that the city has two names; one for the past and one for the present. I tend to use Kolkata because it’s the most recent one.

It came to me in an image of a man finding a corpse in the Hooghly while bathing—during a little in-class writing exercise during a college creative writing class many years ago (around 2005). Much, much later, I developed that cliché (protag discovering a corpse) by exploring what the man who discovers the corpse does with it. He drags it to the shore, abandons it. Okay. Then, even later, I wondered what else to do with this piece of writing that had gone nowhere. And I thought, since I’m so bored with the oversaturation of zombie stories in fiction and media, what if I turned the body into a zombie and wrote a zombie story that doesn’t bore me, instead of complaining about how boring zombie stories are? And so on—the exploration of death, gender, using the undead as a metaphor for the plight of those that are marginalized, abused and suffer indignities and violence daily in societies the world over; all that came up naturally as I wrote the story. It wasn’t planned from the beginning. It never is, for me. I ask my stories what they’re about, and they tell me (or don’t, in which case they remain rotting, incomplete drafts).

On a lighter (?) note, I was also interested in writing a story where zombies behave like actual moving corpses, making for very weak and fragile foes that couldn’t possibly defeat humans en masse like they do in zombie apocalypse stories (not that I have any problem with those stories—I love them when they’re well done, and know what ‘suspension of disbelief’ means. Romero’s original zombie trilogy remains among my favourite horror movies). Dead bodies are very delicate, and don’t last long even when they’re not moving around, so a ‘real life’ zombie plague wouldn’t be that much of a threat to humans (unless we’re talking weirdo infections that make humans/corpses super-strong and fast for whatever reason, like the rage zombies in 28 Days Later)

In your first SF publication, “Kolkata Sea,” [2] you imagined the city under the sea. It was a striking vision of the future. Have you stopped speculating about the distant future of Kolkata? How have your priorities changed over the years?

When it comes to fiction, I don’t know that my priorities have changed that much. I’ll certainly keep writing about Kolkata in the future. I still just write whatever idea most engages me at any one time (I have a backlog of ideas, usually images or premises rather than plots, that I develop one at a time when I feel the urge). Genre is irrelevant to me, except as a marketing tool for the people doing the publishing. I love writing about the present, the past, the future; within realism, non-realism; anything and everything. I’d say I’ve become more aware of the power of stories to influence the way we think as a society, and their importance in affecting a larger cultural context. I’ve become more aware of my responsibility as an artist, as someone who can add, however subtly or inconsequentially, to that larger cultural context, for better or worse (or both). I hope that I’ve learned a lot as a human being since I first started writing. But ultimately all that doesn’t change the fact that I love to write whatever comes to my head and seems like a good story.

“Weep For Day” [3] is one of my favorite stories. Is it a comment on the British Raj? Are there more stories set in this universe?

I try not to put thematic ultimatums on my stories, or art of any kind. It’s up to the reader to figure out what a story means to them, or what it represents, if it means any one thing. Art is interpretive, after all. It means whatever it means. The artist’s job is to provide the seed for an infinite tree of branching meanings, all flowering inside the hive mind of a collective human audience. That said, the British Raj was one of the things on my mind when I wrote “Weep for Day,” if not the only thing. The story certainly deals with colonialism, nationalism and imperialism as destructive and inhibitive forces—ideas that sadly remain as acutely relevant to the present day as they are when considering the era of the British Raj. 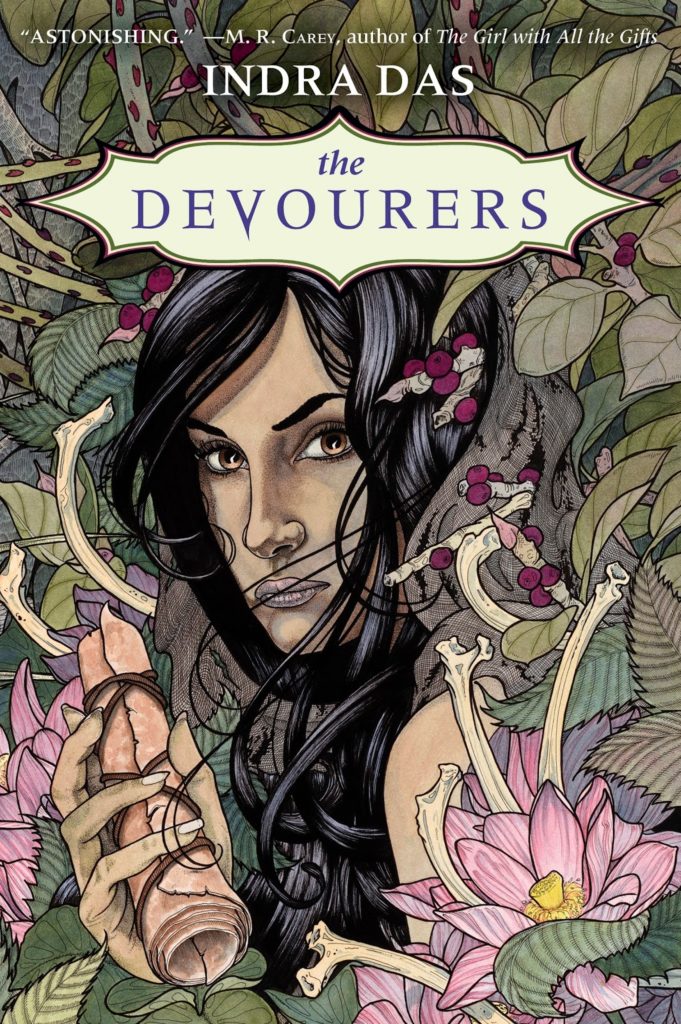 The Devourers by Indra Das

Your debut novel, “The Devourers,” [4] is a historical fantasy also set in Kolkata. How do you see your relationship with the city? In what ways, does its history and people influence your work?

Kolkata is the city I grew up in, so it’ll always have its rusty, paan-spittooned claws in my heart, one way or the other. It’s not a pleasant city to live in, often, but it does have character, and a potent overlay of psychic histories criss-crossing its labyrinthine streets. There are so many stories there, and there is always so much beauty and horror in a city that densely populated and brimming with utter chaos. It’s always influenced my work, and always will. As a place to live in, I often deeply dislike it, but I am also drawn to it in a visceral way, which is quite predictable considering I’ve spent most of my life there.

You are now a consulting editor at Juggernaut. How does the field look from the editor’s seat?

I’ve only been editing at Juggernaut for a couple of months, so I’d need more time to gauge what South Asian speculative fiction looks like as a whole from the editor’s seat. Currently I see a lot of talent, mostly going to markets abroad, and mostly working in short fiction, because of limited opportunities for non-realist fiction within the subcontinent. At Juggernaut, we’re hoping to offer some more opportunities for South Asian speculative fiction writers, and liven up the Indian literary scene with a bit on welcome non-realism, outside of commercial fantasy based on retellings of Indian mythology (which there is a healthy market for already).

I will say that we’re getting more spec-fic novel submissions than short fiction, probably because people who know their markets are probably still submitting mostly to the foreign short fiction markets for sf/f. When it comes to fiction markets abroad, the sf/f short fiction magazines are friendlier to diverse writers/fiction that bigger publishers that tend to skew white-centric, overall. Interestingly, we’re getting a lot of people in business, marketing and medicine trying their hand at submitting speculative fiction (sometimes outnumbering people with careers in writing or the arts).

We are finding good work coming our way, so I have faith in Juggernaut playing its own part in encouraging a wider spectrum of speculative fiction in South Asia.

What is the biggest challenge that SF faces in the Indian subcontinent? How can we overcome it?

A lack of imagination, when it comes to imagining the potential of South Asian speculative/non-realist fiction, perhaps. The fact that it doesn’t have to be one thing or another, that cross-genre fiction exists, that beautifully written stories don’t have to be traditional ‘litfic.’ This lack of imagination leads to a lack of cultural infrastructure for South Asian speculative fiction writers, unless you’re famous or living abroad—a dearth of short fiction markets, and publishers who don’t know how to market books that aren’t commercial fantasy or litfic.

We can overcome this by paying attention to the talented writers who are writing good speculative fiction, buying their work as readers and editors, and reading widely, across multiple genres, so that we have the resources to recognize, distribute and support good speculative fiction within the subcontinent. We also need to look for voices that deviate from the default viewpoint: straight, cisgendered, able-bodied, middle-class, usually male. Nothing stagnates a storytelling culture more than fixating on a narrow set of viewpoints in a planet made up of millions of different kinds of people living in wildly different circumstances.

Indrapramit Das (aka Indra Das) is a writer and editor from Kolkata, India. He is a Lambda Literary Award-winner for his debut novel The Devourers (Penguin India / Del Rey), and has been a finalist for the Crawford, Tiptree and Shirley Jackson Awards. His short fiction has been appeared in publications including Tor.com, Clarkesworld and Asimov's, and has been widely anthologized. He is an Octavia E. Butler Scholar and a grateful graduate of Clarion West 2012. He has lived in India, the United States, and Canada, where he completed his MFA at the University of British Columbia. You can follow him on Twitter @IndrapramitDas.
Salik Shah