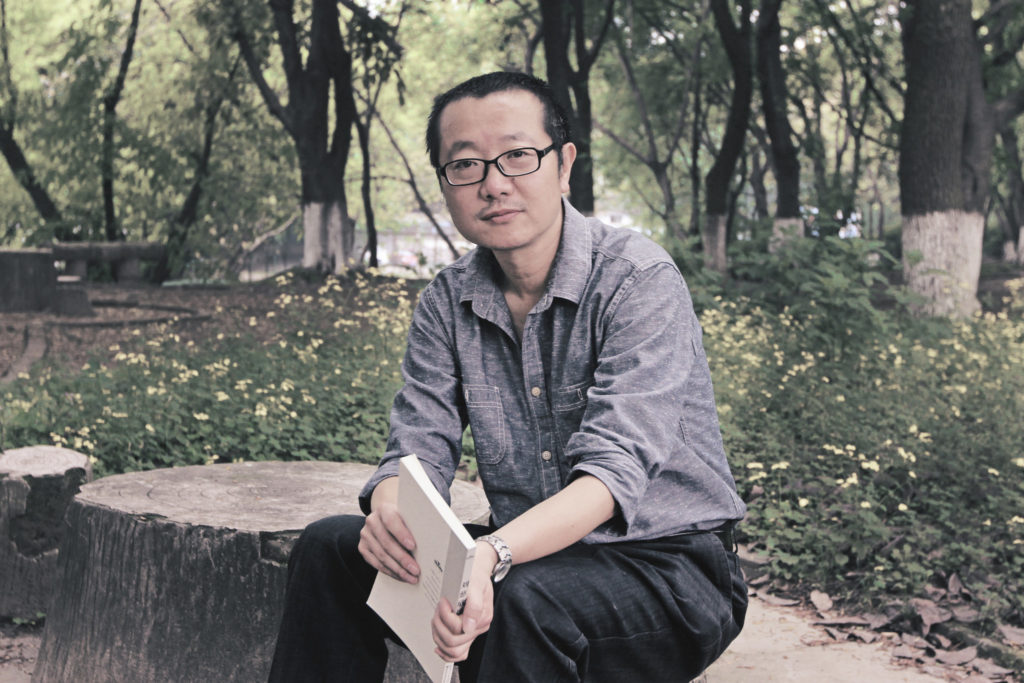 If you have just finished binge-reading Cixin Liu’s stellar Three-Body trilogy, you are in for a treat. I have collected snippets from some of Liu’s best interviews and essays, book reviews and fan tributes here for those who are curious about Liu’s work and thinking, and the state of Chinese science fiction and film.

Chinese science fiction was born at the turn of the 20th century, when the Qing Dynasty was teetering on the edge of ruin. At the time, Chinese intellectuals were entranced by and curious about Western science and technology, and thought of such knowledge as the only hope for saving the nation from poverty, weakness, and general backwardness. Many works popularizing and speculating about science were published, including works of science fiction.

You can also read a brief introduction to Chinese Science Fiction by Regina Kanyu Wang here on Mithila Review.

I write science fiction because I love science, and I want to give the beauty of science literary expression. Ideas about science and technology thus form the core of my stories. But I do think there’s a difference between science-fictional thinking and scientific thinking. The ‘science’ portrayed in science fiction is mixed with a large dose of imaginative speculation, and is no longer, strictly speaking, science at all, but a fictional projection of science. Thus, what you call ‘scientific details’ are really ‘science-fictional details’.

For example, the initial inspiration for writing The Three-Body Problem came from a paper about the three-body problem in classical mechanics, which involves the motion of three bodies under mutual gravitational attraction and is unpredictable under current mathematics and physics. I read the paper and suddenly thought: what if the three bodies were three suns? How would intelligent life on one of the planets in such a system develop? This was a good science-fictional idea — based on solid science but also evocative of interesting stories. But to go back to real science, we have not, to date, discovered any trinary star systems in which the stars move in this chaotic manner.

My biggest challenge is creating interesting stories from the latest results of fundamental scientific research. Take physics as an example. Compared with classical physics, contemporary physics is extremely abstruse. Not only is the maths complicated, but its theories are far from the daily experience of the average person. When given a proper explanation, even an illiterate person can understand Newton’s three laws of motion, and special relativity only requires middle-school mathematics. But it’s almost impossible for a person in the street to truly grasp advanced theories in contemporary physics. The Universe revealed by contemporary science is even more marvellous and rich than the Universe of classical science, and far grander. This is a vast field for science fiction to explore, and perhaps will revive the genre from its recent signs of exhaustion. —Nature

There are examples of science in the book that are so advanced they seem mystical, as well as scenes of whimsy that read like something out of a Stanislaw Lem novel— gossamer threads and colossal reflective spheres, tetrahedrons, cubes, rings, cones, Moebius strips and other geometric solids popping in and out of existence and filling the sky. I personally doubt whether any such events could actually happen, but at the level of science involved—scales tinier than subatomic particles, engineering involving higher dimensions—who knows what might be possible, and the author does a great job capturing the magical nature of the unknown. —Tor.com

The space program of the 60s – the real, visionary space program – was imagined and developed by science fiction readers turned scientists and engineers. Same for the Internet revolution of the 80s and 90s, which is now beginning to rapidly change the world. Arguably, the spectacular advances of science and technology of the last few decades are due to the ability of classic “Golden Age” science fiction to ignite the minds of young readers with science and advanced technology, sense of wonder, and radical can-do imagination.

Other radical advances and technological Golden Ages have been imagined and predicted – nanotechnology, artificial intelligence, the fusion of mind and machine – but these haven’t materialized yet. We have some disturbing sense of stagnation looming ahead, and according to Neal Stephenson we, in the West, have lost the capacity to think big. Science fiction itself seems to be giving up its core mission of stimulating people – and young future scientists – to think big.

China is starting to think big and seems poised to take the pole position in the race toward a bright technological future on Earth and in space. —IEET.org

The Cultural Revolution provides the necessary background for the story. The tale I wanted to tell demanded a protagonist who gave up all hope in humanity and human nature. I think the only episode in modern Chinese history capable of generating such a response is the Cultural Revolution. It was such a dark and absurd time that even dystopias like 1984 seem lacking in imagination in comparison. —Nature

Science fiction is imaginative in ways other genres cannot be.  This is the main attraction of science fiction.  The end of the world and the macro structure you mentioned belong to this category.  I’ve always believed the science premise is one of the best elements of science fiction.  I use the science background to create the literary form of the beauty of science.  In my novels, scientists and science are prominent.  You mentioned Sino-centric.  My stories are Sino-centric because my audience is primarily Chinese readers and because I’m familiar with Chinese history and culture.  “The Three Body Problem” has a lot of Chinese elements, most of the people in the story are Chinese, and Chinese characters save the world.  But I believe in human-centric science fiction, not Chinese-centric science fiction. […]

Compared to the first two volumes in the “Three-Body” trilogy (The Three-Body Problem and The Dark Forest), Death’s End has a more intense dose of my personal style. I strove to write a purer science fictional novel, and wanted to go as far as possible with wild speculations. Thus, I put in the idea of altering the natural laws of the universe as weapons in interstellar warfare, and consequently, the universe and its laws are seen as the leftover mess from a feast of the gods, a strange universe in which the Solar System falls into ruin in a morbid, poetic manner… […]

Contemporary Chinese science fiction is following a path similar to that taken by American science fiction. Over time, literary sophistication has become favored over scientific imagination. Science fiction is becoming “softer,” and a new generation of writers have turned away from the Campbellian aesthetic ideal that we once pined for. Even I, who claimed to be “the most stubborn scifi fan,” harbored doubts about that traditional science fictional ideal. I questioned whether it had lost its appeal; I felt like a lonely defender of a territory that no one was interested in anymore.

As it turned out, I was wrong. Science fiction in the classical sense, for hardcore fans, still had a vitality. It reminded me of the philosophical adage that a principle, no matter how unfashionable, could not be deemed to be dead. —Tor.com

The first movie in the “Three Body Problem” trilogy finished shooting in March of last year and is in production.  The investment was huge and generated a lot of attention at home and abroad. –File 770

You can listen to the amazing soundtrack here.