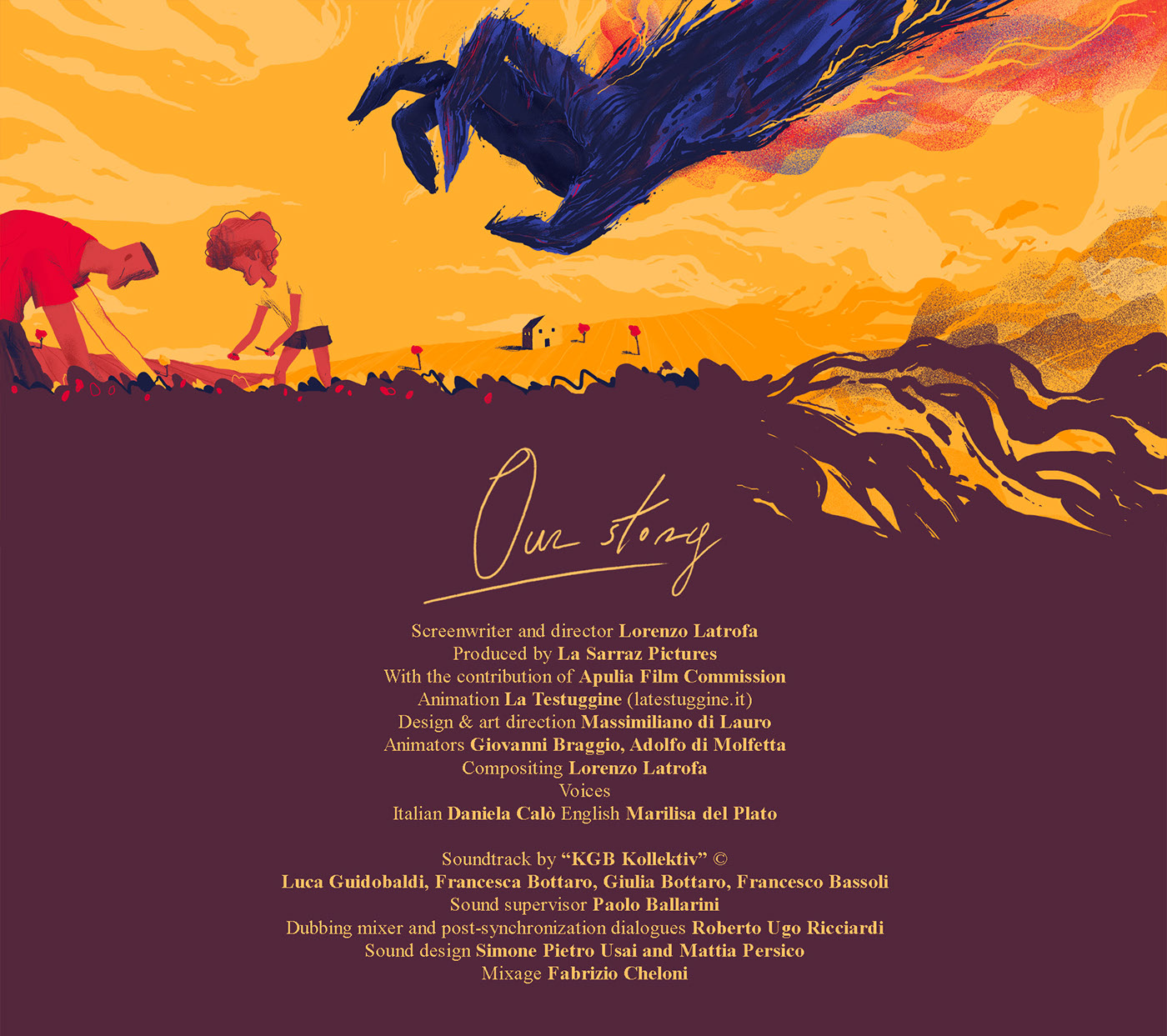 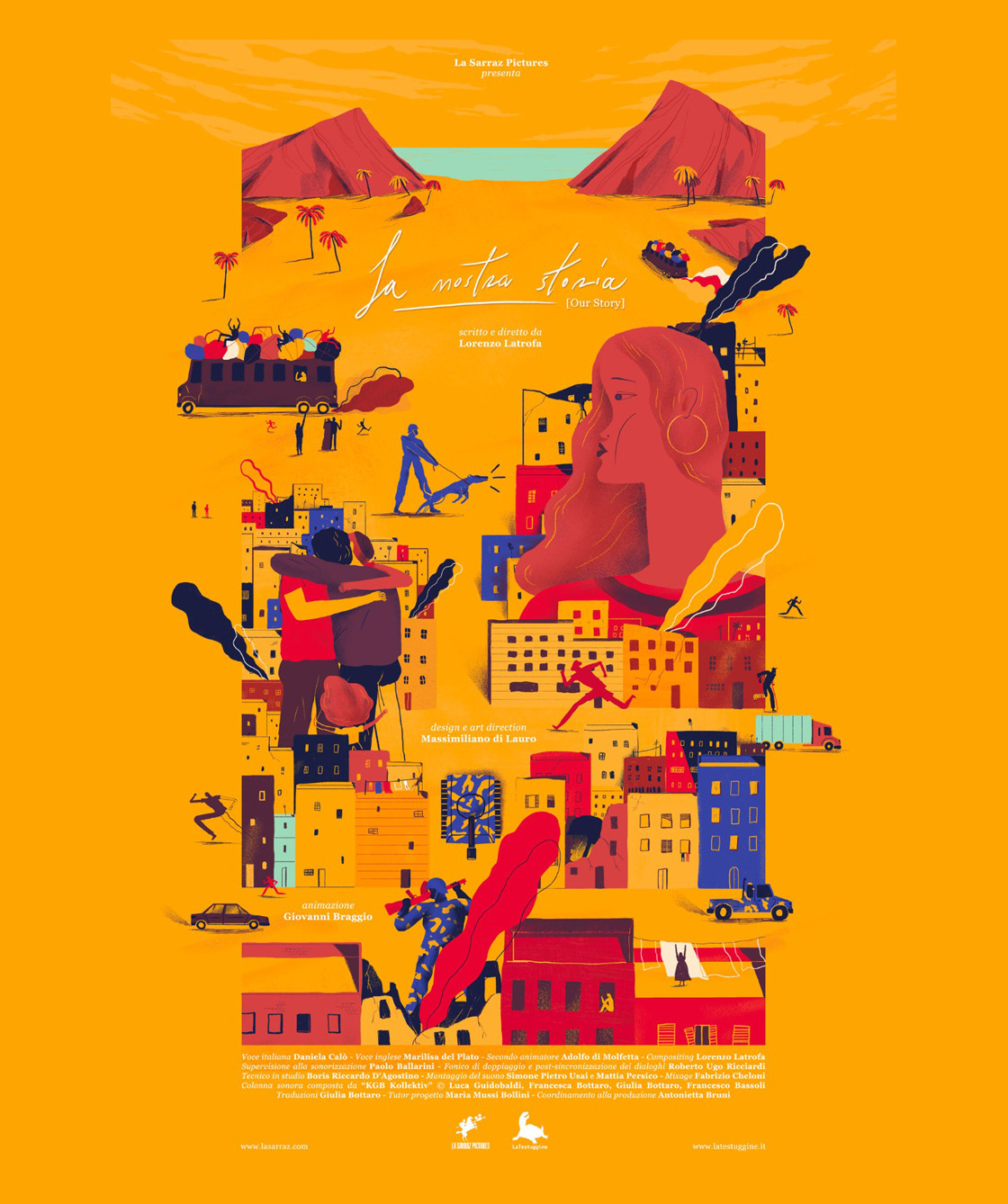 Salik Shah: First, let’s begin with a brief introduction. Please tell us a little about your background and work.

Lorenzo Latrofa: I studied animation at the National Film School in Turin after graduating in Architecture in Rome. In 2010 I started working in animation and founded LaTestuggine, an animation studio I’m still working in.

Massimiliano di Lauro: My background, however, is more related to illustration. I studied design and then I approached to editorial and children’s illustration. Later I started working for animation, first as a background artist for another short movie by LaTestuggine that it’s called Nino & Felix, and then as character designer and layout artist.

S: Who is the main speaker/character in Our Story? What was the inspiration and source material for the film? Why this story?

L: Jama is an eight-year-old boy. He is a fictional character. His story is the summary of all the emigrations stories I read before starting the project. His story becomes an archetype to tell the story of all the people who escape from poverty and war. Jama and his family leave their country with a hope: a better life. Unfortunately, the welcoming of the host country will be far from the expectations.

M: This short film was realized after winning the Italian call “Migrarti” which finances the production of short films on the theme of migration.

S: The story of humanity is the story of crossing oceans, deserts, mountains, and continents. Ironically, the people calling for the migrant’s life or blood are often the descendants of migrants themselves. Refugees and immigrants—legal or undocumented — are often vilified by politicians and fundamentalist groups as enemies or security threats. Do you think films like Our Story can help change the dominant narratives that vilify people who have been forced into exile for any number of reasons?

L: The story repeats itself and it is almost impossible to find populations that have not had histories of emigration in their past. Between 1890 and 1970, it is estimated that around 30 to 40 million Italians left to seek their fortune around the world. But what seems to have been completely forgotten is that the emigration stories of today and yesterday have many points in common. Only through knowledge and acceptance we can stop the chain of hate and fear and stop seeing everything that is different as an “intrusion”.

The main goal of “Our Story” is to reaffirm that immigration is a natural phenomenon that involves and concerns everyone and therefore it should unite us rather than divide us. The stories of today’s emigrants are the stories of our past.

The short movie collapse past and present on a single timeline to eliminate the distances; we will recount the present by diving into the past to bring back to life some pillars of our history at the same time envisaging the future.

M: Surely we don’t expect that a short film can change the mind of those people who would like to suppress the various migratory phenomena with violence but at least arouse reflection, maybe generate some empathy with the protagonists of this story. Then, who knows…

S: What are the most misunderstood or unknown facts about emigration?

L: Immigration is now a core theme in everyday political battle. The public debate is far from reality. Immigration numbers are often exaggerated to amplify the fear of the invader.

M: Here in Italy some politicians even talk about ethnic substitution, invasion, they say that these people who come here want to steal our work but, at the same time, they don’t want to work, that our culture and traditions are in danger, as if they didn’t know that our culture is a melting pot generated by thousands of years of migrations and cultures that have mixed together.

They are all statements without any criterion or real confirmation but they take root on the most ignorant, most disadvantaged, most angry population.

It’s easy and profitable to direct all this frustration towards an imaginary and very weak enemy.

It’s a hateful rhetoric which, however, spreads like a virus in consciences and which is also a grip on the youngest people.

And this is a very worrying fact.

S: How long did it take you to develop the idea into the final film? What was that process like between you and the team? How did you settle on the bold color palette and design? What kind of impact or experience were you trying to create for the audience?

L: The short was written and realized in about 6 months. With the script in my hand, I started talking with Massimiliano about what we want to be seen on screen.

We agreed to use visual metaphors to tell the story. Strong images that will get stuck in people’s minds.

M: Exactly: the characteristic of this project is precisely that we used a strongly metaphorical language, it’s a sort of hybrid length between animation cinema and illustration.

We have imagined something like animated illustrations with flattened perspectives, out-of-scale figures, men who transform themselves into animals.

We wanted to have a strong visual impact that could effectively support the narrative layout and in this sense, it was fundamental the work of the animator Giovanni Braggio who perfectly interpret my drawings.

Acting, especially in the highlight scene when the narrative climax is reached, is truly exciting.

I would like to quote the rest of the crew: the second animator Adolfo Di Molfetta and the authors of the music, KGB Collective, who all have done a great job.

The color palette is very narrow. Basically we choose three color sets: one with a blue cast for night images, one for stronger and more violent images with a strong contrast between yellow and purple and a third for the quieter narrative part with more subdued tones. They all are however connected to each other.

S: I was hoping that this would be a feature-length work. Is there a longer film or graphic novel in development? When are you going to release the short film for the general audiences? Where can they see this film?

L: We were thinking to transform the movie in a book. We are now looking for an editor. We love the idea to reach a greater audience with that story. Nowadays all the countries seem to want to build walls around them. So it’s even more important to cultivate a culture of acceptance and sharing.

The short will be soon published on a DVD and will be published online on our social media in the next months.

S: What are you working on these days?

L: Now we are working on the development of a feature film. A coming-of-age story with a kids target. It’s called “The Breath of the Mountain” and is produced by La Sarraz Pictures. The same production company of “La Nostra Storia”.

M: About the design, it’s a very different project for various reasons, mainly due to the theme addressed, very different from that of Our story, then the target and the length of the project are very different.

Consequently, the design is more suited to the language of the animated movie, with fewer textures, with simpler forms but with a perspective and proportions among the elements more realistic, without giving up a fresh sign that characterizes our work.