Excerpts: Half of What I Say

“Who’s the most beautiful woman of all?” asked Padma, with satisfaction.

He is glad because he understands how a man might dream of an unattainable woman. His name isn’t important, but it is convenient to give the woman a name. Kannagi. His dream isn’t a wishful one; that is, Kannagi is as real as he is. Perhaps he first met her in his Columbia University days and they had been that hard-to-define thing: a newbie couple.

Kannagi is exactly as she used to be. Five foot two, dark as Tamil, glowing with energy, attitude, hundred dollar Fendis, stylish black jacket, Guess corset top, designer jeans, her small brown boobs jiggling as she moves towards him.

He doesn’t mention the jiggling brown boobs to his wife. What he says is this: I had a dream we were at this restaurant and bumped into an old girlfriend.

Now there are several possibilities as to how Padma will reply. She could say: oh God, not your mother-dream again. Padma has a snarky sense of humour, which always used to catch her daddu by surprise since he’d raised her to be a nice Indian lady. Of course, it is not necessary to assume Padma had always been Indian. She is certainly Indian now.

‘Kannagi’ suggests any number of things. It certainly suggests she is South Indian. That is true. To be precise, she could be Sri Lankan. Or Tamilian. For instance, her Tamilian father had first been a Sri Lankan refugee, then an Indian citizen, then a consulate officer in San Francisco, then they’d been NRIs, Kannagi had straddled cultures, languages, time zones, all thoroughly confusing, until she made up her mind.

There’s another possibility. Kannagi had been a film major at Columbia, he’d been struggling in the Business school, he’d returned to India, they’d lost touch, it had been the pre-Facebook era, et cetera. This has happened to many people.

He believes Tamil women to be the most beautiful in the world. It is true they combine the best of Aryan and Dravidian features, but honestly, aren’t such statements usually based on prejudice? For Tamil, he could just as easily have substituted, say, ‘Kampuchean’, and leave the truth undisturbed. In any event, he may share this preference with Padma, who has participated in beauty contests and therefore considers herself an expert on feminine beauty.

If her broad-mindedness divides them, it can also unite them. Some of their most humourous couple moments must be when they simultaneously check out women at malls. She knows his type and sometimes points them out. There’s one, she’ll say, with a nudge. Padma thinks they’re all variations of the word ‘voluptuous’, whereas he isn’t sure if they aren’t all variations of a certain bra-less aunty from his childhood.

On the other hand, he doesn’t know her type even if he thinks he does, which provides Padma with a lot of amusement. Naturally, Padma wouldn’t dream of doing anything disreputable. As a middle-class Indian woman from a respectable family—is there any other kind?—she’s probably been conditioned to think pleasure arises from straying within boundaries. Padma is merely honest about what she feels, which is one reason he may have fallen in love with her. There is another possibility. To an intimate friend, the man says: Of course I love Padma, I love ruins.

In any case, what Padma will actually say if he mentions his dream is this: I don’t dream of fucking other men.

Which is certainly true, though rather crude. It is a sign Padma is now confident about sex. In the early days of their marriage, it seems Padma couldn’t bring herself to mouth that one-eyed devil word: ‘cock.’ One plausible explanation is that she dislikes the vulgar sound of the word. But the real reason is that it’s because her husband doesn’t have a cock. He has a ‘someone.’ As in: someone’s excited, someone wants to come in, someone doesn’t agree. Awkward, to say the least.

Kannagi couldn’t have been awkward; it is un-American to be awkward. There’s no reason to doubt either of the last two statements. In any case, she didn’t think she was attracted to Indian men. But there’s no predicting either passion or plumbing. Or perhaps it is simply that any couple will happen, given enough time and proximity; both Mrs Thatcher and Kim Il-Sung have expired, so it is hard to be certain.

Speculatively, if Kannagi and he had been roomies, chillax friends, hash buddies, then they’re basically just one great picnic or concert or fun-night away from dry-humping each other like demented intercaste rabbits. Later, their other two roomies, Josh, an American, and Salah, an Egyptian, would beg them to layoff on the Whitney Houston they played to mask their animal sounds. So perhaps Kannagi had been coy after all.

But what does it matter what Kannagi is or isn’t? It might be more relevant to inquire why he feels dissatisfied and not reassured. The difficulty isn’t that Padma is a ruin, to recall those cruel words. She isn’t a ruin in the physical sense, he doesn’t think that. Padma turns a lot of heads.

No, she’s a ruin in a different sense. Maybe it is what she’s made of her life. Padma, a former Miss Maharashtra, a Miss India runner-up! She might claim to have studied with Uma Sharma, performed onstage with Padmini Kolhapure, but if so, all she’s taken away from the experience is that she has their phone numbers. Why hadn’t she pushed herself? Her daddu hadn’t approved of hanging around studios, that demanding Subhash Ghai, daddu had worried so much, it wasn’t good for daddu’s heart. Daddu refused to eat, wouldn’t sleep! There were escorts, taxis, expenses of all sorts, cannibals to worry about, it was all so very inconvenient. She had caved in. Her husband was so very wealthy, where was the need to work? All very good reasons, of course.

That is the problem, isn’t it? Our chikoo sultans, their black hearts hidden in the sweetest pulp. He doesn’t blame Padma. What exactly would she have been rebelling against? There’s no enemy on the other side. He thinks desi women are like Arjun on the battlefield, besieged on all sides by love. Padma lowered her bow. He can’t blame her.

He could though. He can shout and rant, hurl curses at ‘the System’, cajole her to be more than she can be, perhaps he even arranges a screen test with Ekta Kapoor for a daytime soap and how satisfied she’d be with Ekta’s gentle turndown, but in the midst of his rant, she may say complacently: you’re just like daddu, always watching out for me. Or: I love you, you’re so supportive.

She says this often, which is tolerable, but he suspects she means it, which isn’t. He could bear it if she didn’t love him. If she saw this life as an extension of childhood’s prison, he’d kiss her feet. He could respect her if she hated him, his native kind, his judgment, his superciliousness, his dismissal of her necessities. But she is so content. So much aptitude, so much education, so many advantages, and so little to show for it all. Of course, she could ask:

But if you need to ask that question, it is already a tragedy isn’t it? What does it matter what he wants her to do? Kannagi doesn’t care what any man wants her to do. For her final year, she shot a zombie movie in the Amazon, won awards, worked as James Cameron’s assistant, took off into the stratosphere. No one would be surprised if all this was true; Kannagi is the kind of woman who attracts those kinds of histories. In contrast, Padma is a placeholder. She’s a caste, a tribe, a colour, a gender, someone’s ideal. She’s all the music she’s been told to enjoy, all the books she’s supposed to have read, all the grades she was told to attain. There is no Padma.

If there is no Padma, then it raises new possibilities. Perhaps the man never left the US. Perhaps he turned American, joined a prestigious Business faculty, enjoys a casual relationship with Kannagi, and only occasionally dreams of an alternate life, one in which he is Indian, has forgotten everything and has had an arranged marriage with an endangered species. In that life, he might awaken, turn to Kannagi, perhaps sitting cross-legged on the bed worrying over a script, and say— well, so on and so forth.

That may be true. He collects ruined things, cherishes them. His bathroom is filled with proofs. Ruins must mean something else for this man. But what? If prompted, doubtless he will offer his reasons. It is highly likely that in his many speeches, inspirational mythologies for the young entrepreneur, there’ll be touching dedications to Padma.

Indeed, who is this ‘intimate friend’ to whom he said the alleged words? And how did he respond when Padma commented on their lack of sex? There are more untied threads. But it is clear that life is no story, so at this point, all threads must once again diverge, inevitably.

So yes, of course he understood how a man might dream of an unattainable woman. Padma acknowledged that comprehension with a dazzling smile. She leaned close, and turning so as to block any view of his hands, allowed him to caress her creamy waist. He hid his surprise. His wife’s cheeks were rosy, her eyes aglow with the rush of being unavailable. She is turned on. How she loved these high-fashion affairs. Leaning forward, she whispered in his ear:

“Who’s the most beautiful woman of all?”

“You are.” He squeezed her waist, knowing it would leave an angry mark. “You’ll always be.”

“Are you sure you married the right sister?” she whispered, rubbing his cock awkwardly.

“Control yourself, you are drunk.” He drew away.

“Just a little. Sorry.” She kissed him, genuinely contrite. “Isn’t this wonderful? I have my dream life, darling.”

Excerpted from Anil Menon’s novel Half of What I Say (Bloomsbury India, 2017). 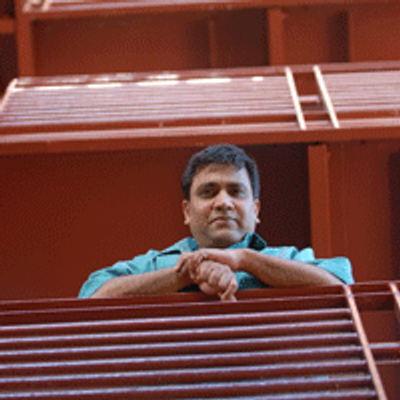 Anil Menon's short fiction has appeared in a variety of magazines and anthologies. His debut novel The Beast With Nine Billion Feet (Zubaan Books, 2010) was short-listed for the 2010 Vodafone-Crossword award. Along with Vandana Singh, he co-edited Breaking the Bow (Zubaan Books 2012), an international anthology of speculative fiction inspired by the Ramayana epic. His most recent work is the novel Half Of What I Say (Bloomsbury, 2015). Website: http://anilmenon.com/