I started smuggling things at an early age: ice-cream for the chowkidar, cold drink for the sweating gardener and chocolate for the maid’s kid. There was a sense of adventure in sneaking things out of the kitchen — basic things that were available to me in abundance, but prohibited to these folks who worked harder than me to keep the house. It may seem like an innocent act of kindness, but believe me I had selfish reasons to do it.

Baba, the chowkidar, was my source for stories, both real and imaginary. With my grandparents gone and parents pre-occupied, Baba was the only person who had the time, and the stack of stories a septuagenarian inevitably accumulates over a lifetime.

I was fourteen when I got curious about the events of 1947 that resulted in the creation of two new countries, and uprooted millions. Textbooks gave me the biased political view but I wanted to know how people actually felt. Baba was the perfect person to ask since I estimated that he must have been a teenager at that time, old enough to remember.

When I asked Baba why the partition happened, he laughed and shrugged, but when I showed him halva — one of his favorite sweets — he couldn’t say no.

“There is a human emotion that spreads faster than wildfire,” he said. “It is called fear, and has been the reason for some of the biggest events in history.”

Baba’s family lived in a small village near Amritsar called Chabba. His parents had died early and he was raised by his grandfather, who was a very spiritual person. Being an agricultural village, his grandfather worked in the fields all day, but right after the Maghrib prayers, he would ask Baba to setup the bethak with clean linen and incense. Baba’s grandfather would then sit on one side of the room and recite verses from Quran in the most mesmerizing voice ever.

Guests would arrive and fill the bethak within minutes of the recital. People of the neighborhood poured in irrespective of their religion; the Hindus and Sikhs were as mesmerized by the Qirat as his Muslim neighbors. There were some strangers too, people Baba had never seen before, but everybody assumed they were just travelers passing by and no eyebrows were raised. Interestingly though, whenever Baba would try to talk to one of these strangers, his grandfather would pull him away and send him on a meaningless errand.

Baba had an equally mesmerizing voice and sometimes his grandfather would ask him to do Qirat as well. Even though the room was always packed, Baba kept noticing new faces that stood out from the rest.

“Who were these people?” I asked innocently, not realizing that it would open a Pandora’s box.

“I was very curious too, just like you are. But this wasn’t the only thing that piqued my curiosity. My grandfather being a very spiritual person also used to spend all the time between Tahajjud and Fajar in deep meditations. Some nights, I would wake up by the sound of his voice, deep in conversation, but would not see anybody else in the room. One night, I pressed him on these strange voices and the strangers who were regular at the recitals. He said there are many things that I have to learn”.

Baba paused for a moment, and looked at me as if trying to make a tough decision. “I was your age at that time so I think you are big enough to understand! My grandfather told me that there were beings out there different than humans. Beings that, even though more powerful than us in many respects, cannot do everything that humans do. Our recital mesmerizes them equally and they come to listen. I was a little scared initially, but when he laughed and told me not to worry and that they would protect us rather than ever hurting us, I was relieved. However, he told me to never disrespect them and only talk to them when absolutely necessary.”

“Were those…” I said with my eyes wide open. This twist in the story was completely unexpected.

“Yes, they were!” Baba smiled.

“Could you tell that they were…?”

“No. When they co-exist with humans, and many of them do, they avoid doing anything that makes them stand out. They look, talk and act like a regular person.”

“There must be something.” I was persistent. “Their eyes, their height, their voice, something?”

Baba took pause for a few moments as if trying to think. “Yes, but you need to keep it to yourself, ok?”

“You must have heard how Prophet Solomon’s reign encompassed all sorts of beings,” Baba was now whispering. “There were some who were not faithful to him, and to differentiate from them, the faithful ones engraved on their body a symbol that looked like Solomon’s ring. Most of them still carry that symbol, but it’s usually hidden under the clothing.”

Baba’s grandfather had shared this secret with him. And when Baba spotted the symbol on the wrist of one of those strangers, he was afraid for a second, but then, it seemed the stranger had sensed the fear in him, and he smiled at Baba reassuringly. It put Baba at ease. Baba was sure that his grandfather knew a whole lot more, but before he could share his knowledge with Baba, the riots of 1947 broke out.

I became sad just listening to Baba talk about the riots that took his grandfather from him and left him all alone in the world. When the mob came, his grandfather told him to go hide inside the large water tank, and went out to reason with them. “When anger consumes you, all the reasoning in the world fails,” Baba said mournfully. The same people who had attended the Qirat previous night, thrust a knife into his grandfather’s heart. Baba could not do anything but weep silently, letting his tears mix into the water.

Hidden in the darkness of the water tank, he thought about his options; his grandfather had decided not to migrate to the new country, but staying back now would be suicidal. He slowly crept out of the water tank around dusk, careful enough to not make any noise lest another kirpan or khanjar finds him. The house was empty and dark, but surprisingly the bethak had clean linens and the fragrance of incense, as if somebody had been waiting for the Qirat. He could not see anybody, but immediately thought of those strangers and wondered what will happen to them. Men were dividing the land like they are the only species who matter. What about those other beings who co-existed peacefully in the shadows? Would they stay back? Would they migrate?

With a heavy heart and welled up eyes, Baba left the house in the middle of the night. Chabba was ten kilometers from Amritsar, and he wanted to make that journey in the dark of the night, hoping to catch a train going to Lahore from Amritsar first thing in the morning. He kept walking through the fields, getting startled at even the slightest of sounds. He did not encounter any violence, but even before he could reach half way, he collapsed from dehydration. “You may laugh at what I am going to say, but as soon as I fell, two strangers appeared from nowhere and offered me water from their leather satchel. I was shocked because I was watchful of being followed,” Baba said, still sounding a bit alarmed.

The journey through the night was more enervating than Baba expected, mainly because every little sound would scare him for his life. He can swear that at least once he heard a mob very close to him and was convinced of his looming death, but something distracted the mob in the other direction and they passed without noticing him. Baba finally reached Amritsar station in the wee hours of the morning and hid behind a small building until it was time for the train. He was ecstatic when he saw a large crowd of Muslims embarking the train with him and finally felt safe. He didn’t understand that at those times safety was an illusion, and that proved to be the case when the train stopped just a few minutes outside of Amritsar. With everybody screaming, shouting and trying to either hide or run, it wasn’t hard for Baba to figure out that a mob had attacked the train. “I hid under a bunk and surrounded myself with people’s luggage so I won’t be seen. I could see from a small opening though when two people from the mob entered our compartment and started killing everybody. Then one of them shouted at another to check under the bunks and my heart almost stopped. A few seconds later, somebody grabbed me by my collar and dragged me out. As he held me tight with my arms strangled in his strong grip, the other guy drew a khanjar. I had never been more certain of my death than at that moment when his khanjar was about to pierce my heart, and it was probably that overwhelming sense of fear that caused me to pass-out before witnessing my own death. Surprisingly though, when I came back to my senses, after who knows how long, those two men were lying dead in the compartment and I was unscathed. Still shivering from terror, I couldn’t comprehend what had just happened? The khanjar was so close to me that it was crazy to imagine it had missed the mark. I was lost for a few moments, but then suddenly thought of those two strangers who had given me water during the night.

“Were they moving to Pakistan with you?” I asked.

“I am not sure, bacha! They were used to living among us, co-existing with Muslims. Or maybe they just came to protect me. Sometimes I think they came along for my Qirat!” Baba smiled.

As the train had stopped, Baba had to make the rest of the arduous journey to Lahore on foot with thousands of others. They were soon joined by the soldiers of Baloch Regiment, and there were no major incidents during the rest of their journey. Baba had tried his luck in Lahore for a few years before moving to Karachi.

I couldn’t get Baba’s story out of my head for days. He said he stopped doing the Qirat a few years after the partition, and never noticed those strangers again. I kept asking myself what those other beings had thought of the partition. If a lot of them co-existed with humans, it was a great opportunity for some of them to take over the identity of Muslims that were killed during the migration.

I went to Baba one morning to see if he would agree with my crazy theory, but my mother had asked the poor guy to climb the jamun tree to pluck the tangy fruit. I was waiting for him to come down when his foot slipped and he fell down with a thud. Everybody came running and was relieved that he was okay, unconscious but safe because he had landed on the soft grass; I was oblivious to the commotion around me, and my eyes were glued to an engraved ring-like icon tattooed a few inches above his ankle. 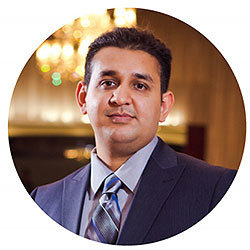 Tehseen Baweja is a founder of The Salam Award for Imaginative Fiction.