When Elon Musk says that in the future there will be loans for people who can’t afford a ticket to Mars, and they can work in jobs that pay them to fund their trip, it isn’t surprising that many are apprehensive of bonded labour on the Red Planet; especially, when the average ticket would cost hundreds of thousands of dollars. Yudhanjaya Wijeratne’s The Salvage Crew published by Aetheon Books offers a ride into what this sort of a world might look like.

Our protagonist, AMBER ROSE 348, is the property of PCS — Planetary Crusade Services, a corporation that provides “end to end interstellar colonization support”. AMBER, an AI- a “digitized human”, is also referred to as the OC, short for Overseer. Their mission is to go to the planet Urmagon Beta and retrieve the remains of a terraformer lost from an Earth colony ship, Project Gilgamesh, sent about a hundred years ago.

On this mission, AMBER oversees a mercenary crew of three — Simon, Anna, and Milo, hired on contract by the PCS. The caveat: you wouldn’t want to be relying on these three to retrieve something from your neighborhood much less on a strange planet where your life depends on it. They’re the “D-Team,” that too on a good day. Their destination planet is also not the most welcoming of spaces.

From the very start, things go haywire; botched up landings, unknown creatures, and lack of resources. But The Salvage Crew isn’t your usual space opera. The narrative voice is unique in its nonchalance and humour that diffuses the tension even as it intensifies it by providing a sharp commentary on contemporary issues like AI, language, capitalism, colonialism, human survival, and space exploration.

The book starts with an interesting foreword. There are parts of the book which are built with the help of a machine. The poetry is created from an open-source AI project; the world is built using a world generator. While this seems like a futuristic concept, the author clarifies that this isn’t the future, rather it is the present.

The plot itself explores this concept of human-AI co-existence. OC was an erstwhile human whose brain is now in a metal box. They have to work in coordination with the three humans, to carry out the mission. OC themself wonders why digitized humans, instead of AI from “science-fiction flicks” are part of such missions:

“…the theory goes, the humans ask the right questions, make the right pseudorandom moves, nudge your thinking in all the right ways- ways that a machine can’t. Humans evolved to survive, and they’re fantastically good at it.”

The idea of a sentient AI is also brought into focus. OC seems to have his human consciousness intact. They ‘feel’ emotions, and much to their own chagrin: fear. In the book, the AIs in the earlier times used to be a “human mind” with no fear or happiness. “… But fear was deemed to be too important a feedback mechanism, too critical to the learning process, so [the OC’s] generation was left with most of [their] emotions intact.”

OC’s a ‘person’ with impeccable calculation skills, yet the “digital memory” also makes them forgetful. They dream, they dread, and botch up tasks like humans. They also write poetry. Only Buddhists are chosen to be these OCs since their conversion to machines is a rebirth instead of death. OC isn’t an enlightened AI, but is looking for the “right hill to die on”. At times OC is grateful for not being trapped with two legs and two hands, and at times they miss being human.

The crew constantly questions OC’s outlook during the mission. It shows a ‘machine v. human’ divide, where the machine is breathing down their necks, monitoring all their activities, while the humans need a celebration every now and then. This (dis)harmony of working with AI and the issues also point to some modern-day problems. Take, for example, Amazon workers, who are expected match the speed of the computers, making their lives miserable.

The Salvage Crew asks the question of what it means to be a machine. It also brings out answers to what it means to be human, at times through contrast, and at others through overlap. Wijeratne writes: “Humans think they crave the unknown and the freedom to do whatever they want to. In reality, they crave it for about ten minutes before they start yelping for order.”

PCS’s main focus is to keep “transport costs low and margins high”. The “cost of doing business” trumps everything else. As per the top bosses, “everything in the universe is a function of budget and power”. If they don’t “profit” from this mission, everything goes in vain.

In the book, everyone is holding tightly to the rungs of the corporate ladder. The OC dreams of climbing up and handling bigger missions and crews. The three crew members are contractual, and at the mercy of OC, whose feedback upon return would determine how much money they get for the mission.

There is a sense of unfettered greed which has expanded over the breadth of the universe. Even in life-threatening missions, the PCS would give insurance coverage only if at least 70% of the target value is recovered. “Basically, you either succeed or you die. Alone.” The biggest sin is being captured by an enemy corporation.

The crew is constantly monitored by the OC, who picks up even the slightest change in their bodies, similar to the invasive technologies used nowadays to ensure that work is carried out well.

On seeing one of the crew members delegating work, the OC quips:

“I think the idea was to replace humans in war. Yet another bleeding-heart save-the-humans initiative, stalled when some military accounts pointed out that (a) replicants were stupidly expensive and (b) there were more than enough humans walking around for dirt cheap.”

“They work like they’re used to someone cleaning up after them. We’ve killed a dozen people now, and the immediate next target is ‘get the metal’?”

The terraformer that the OC is looking for, is supposed to have wiped the environment clean with anything that could harm a human. Our present Mars colony ambitions are also hinged on terraforming the environment there. There is also a subplot about the UN being at loggerheads with the “Outer Reaches Colonial Association” — an insurgent group, which was pushed by the UN to take up arms.

The story is replete with examples of how the UN has made life on other planets hell. The realisation dawns upon the OC soon:

“All I could see was what we’d stolen from a people who’d just wanted to be left alone.”

“You are yet another sacrifice on the altar of trade and cooperation.”

“The terraformers do not have a problem with genocide.”

“Shen the machine has nuked half this world’s plant matter, or something like it, and that is progress.”

“Language is a communal activity… It has no meaning outside the community that speaks it.

Language is one of the central themes in the book and is brought out at the perfect time. When you think that you have the story figured out, the author pulls the rabbit out of the bag. Don’t let the novel fool you. Don’t let it make you think that it is all a light-hearted, tongue-in-cheek narrative. Don’t let quests like vodka fermentation (when electricity and food are sparse) make you think that the story doesn’t have deep insights to offer.

I’ll leave you with two quotes from the book to pique your interest:

“There was [a] philosopher called Wittgenstein, […] who once said that all philosophy should have been written as poetry.[…] I wonder what he would have thought if millennia later, his thesis…”

“…and not for the first time I felt the inadequacy of the language I was born with, like a frame limiting my world.”

The book is interspersed with pop culture and historical references, which add to the reading experience. “Winter is coming” and life is also “nasty, brutish and short”. There’s creationism and survival at play; there’s the Chinese Room Experiment; references to poems that appear at the right time. And there is a method to the madness. This is the kind of book which makes for a great re-read as you are better able to connect snippets of the final idea scattered through the book. In the first reading, the middle portion might read a little slow, but the climax makes up for it.

One thing which I would have liked to know more about were the characters in the book. It seemed like their personalities were conveniently shaped to fit into the plot, and didn’t grow as much in the story, except for the OC. Maybe since it is told in the first person, you see the OC getting closer to the other members, and caring for them, but this isn’t the case between crewmembers. One reason could be that certain plot points were also decided by the computer code, like when Anna and Milo would fight.

The author takes an idea from sea-ships and applies it to space ships. There is also the entire gamut of scientific ideas to push the story forward. Like energy generation, food production, and so on — all in an unknown environment, which makes it a fascinating read.

Read the book for its ingenuity. Or you can listen to the audiobook narrated by Nathan Fillion. Either way, the book will take you on a journey that’s exciting. 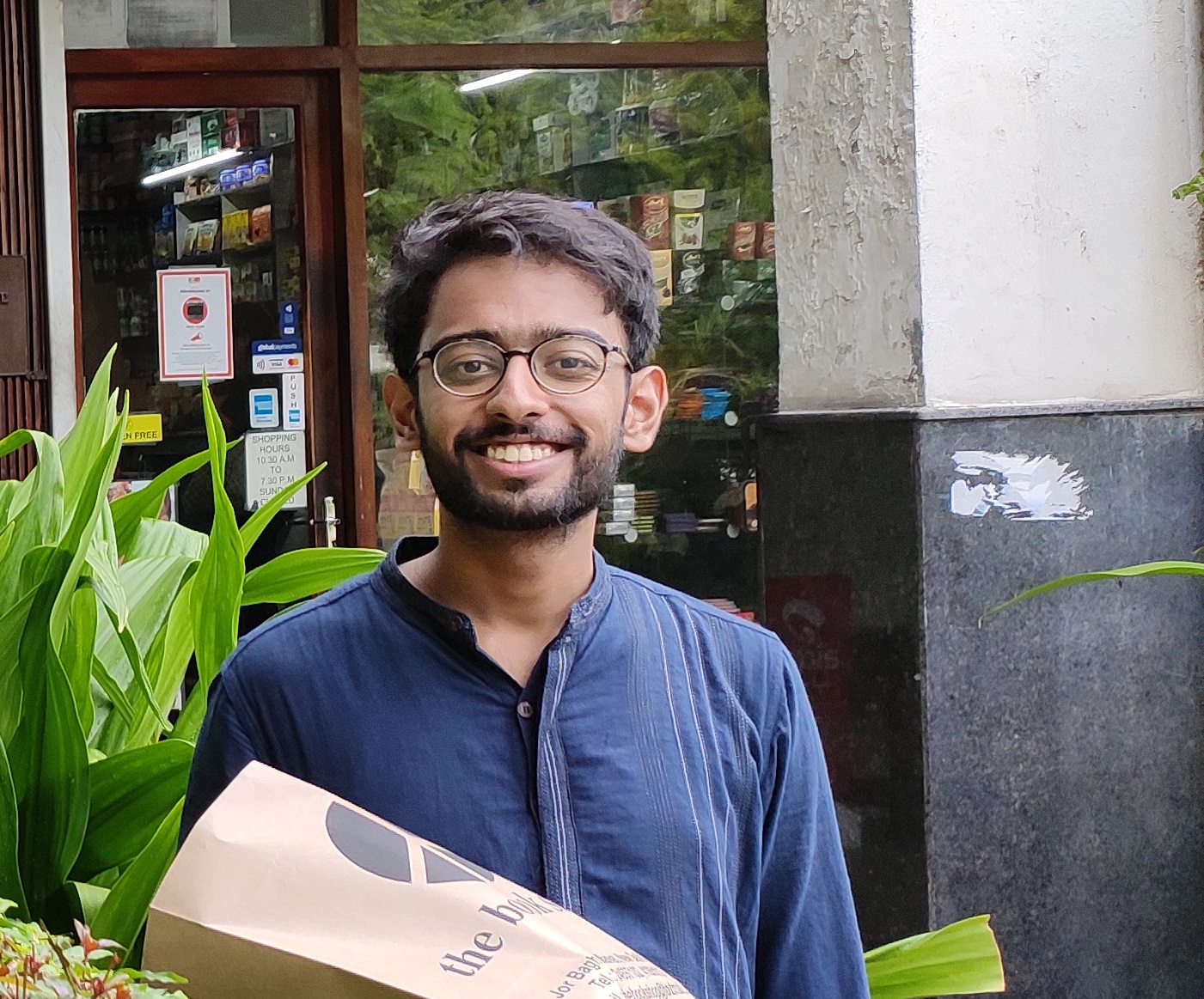 Umang Poddar is a writer and a lawyer by training. Currently, he is the Editorial Head at Lawctopus and a First Reader at Mithila Review. You can find him on Twitter @UmangPod and his reviews on twodsinapodd.wordpress.com.