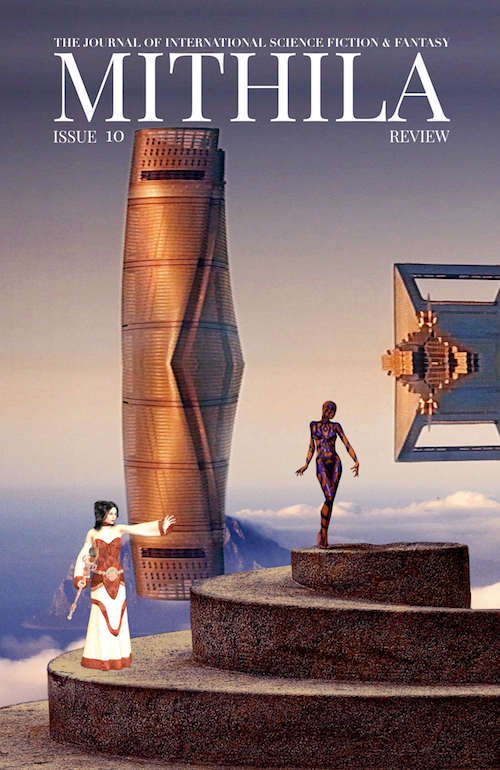 The 10th issue of Mithila Review comes to you after a long interlude. The word “interlude,” however, doesn’t quite do justice to the time between our last issue and this one. “Interlude” suggests a notion of passiveness — the idea that somehow a chunk of time hung suspended between two events. But can we ever conceptualize time as stagnant? Even when we don’t talk of time as a movement in a unidirectional sense as in talking about time as a linear progression, it is difficult to think of time as stagnant.

At Mithila Review, we’ve witnessed changes and shifts that may not have been conducive to the regular publication of this journal but have been meaningful to our own journeys as individuals and a collective. I often think of myself as an individual having cycles of contraction and expansion where there are times where I fold deep within myself and create meaning internally, and there are times where I unfold to the world and learn and grow externally. Either way I like to believe that there is movement, not always forward, but definitely movement. Often, there are times where we backtrack and do some things again like I am doing now — starting a doctoral program in America after having spent a substantial amount of time in a graduate program in India.

I would like to believe that between our previous issue and this one, each one of us was taking the time to better equip ourselves to carry our individual and collective visions more clearly and effectively. We have been working on India 2049: Utopias and Dystopias, an anthology of original speculative fiction, which will see the light of day early next year. We have also been building local and global networks to find patrons and collaborators to help us sustain this journal over time.

Coming after almost a year, this issue in many ways deals with time. The collected stories explore what it means for people, over time, to make the journeys they do, become the people they become, and have experiences they have. Speculative fiction often deals intensely with questions of temporality but stories and poems in this issue grapple in very complex ways with time and identity. Indra Das’s “Sita’s Descent” and Bhushita Vasistha’s “Lopamudra’s Wedding” reconstitute women of the Indian subcontinent’s mythical past into beings who temper any kind of simple notion of us moving into a linear, straightforward future. The non-normative temporalities in the stories work well to challenge the normative constructions of these women as gendered beings in the mythical sources that they are drawn from.

Sarah M. Prindle’s story “A Time Called L’apatia” delves into the circular nature of a time characterized by an emotive register. Such an emotion is simultaneously of the past but could very well be of the contemporary and how the experience of such a time could potentially transcend generations. Even when they do not directly address the idea of time, fiction and poetry in this issue remind us that each thing is forged through some conception of time, particularly our identities and relationships. D.A. Xiaolin Spires in “nakajiru” deals with a child’s relation to the parent. Likewise Yuan Changming’s “YUAN: the Origin of a Family Name” is about the personal relationship with one’s name, which has its own history, its own story of how it came to be. Time is ultimately that which allows us to tell a story; it is what gives movement to a narrative.

There are works in this issue that offer you much more to think about than time, of course. Happy reading!