YUAN: the Origin of a Family Name

Y:      You are haunted by ‘Y’, not because it’s the first letter in your
Family name, but because it’s like a horn, which the water buffalo in your
Native village uses to fight against injustice or, because it’s like a twig
Where a crow can come down to perch, a cicada can sing towards
The setting sun as loud as it wants to; more important, in Egyptian hieroglyphics
It stands for a real reed, something you can bend into a whistle or flute
In pronouncing it, you can get all the answers you need, besides
You can make it into a heart-felt catapult and shoot at a snakehead or
Sparrow as long as it is within the wild wild range of your boyhood

U:      is surely a part of you, while you sound no more than a s single letter
U, which is nothing but a copy of a chick; you used to be on the bank of
The Nile, where u can be changed into v within a european word as in yvan
It’s said you have the makings of a victor, a powerful us or un representative
Who begins the unit, the union, the uniform, the university, the universe

A:      As the first born to the Semitic family, A was originally
A picture of an alef or ox, the agricultural energy that was rotated twice until
Alpha loomed up in the Greek psychoscape even before
Adam became the chosen father of all Europeans close to
Athens, where Apollo had acupunctured wisdom and knowledge into
Aristotle, the intellectual ancestor of modern man, who inspired
Alexander to make the first effort of globalization, which did not reach East
Asia, the land of Ah Q’s, the largest hotel for
All travelers until centuries later, but it is
Atomic bombs that will blow up all our pasts and send us through
America to a higher civilization, where the drop of an
Apple is to enable us to fly to the other side of the universe
Along the cosmic string as Africa, the heart of human darkness
Awaits for Buddha, Jesus, Allah or an other unknown
Author to come and rotate for the third time
A scarlet letter of A

N:      No, nobody knows this but you are really no more
Or no less than the old Egyptian metonymy of a stream, river
Lake, sea or even an entire ocean, where there is always water
Where there are always fish rather than a synecdochic Z
Pushed straight upright On the bank of the Euphrates 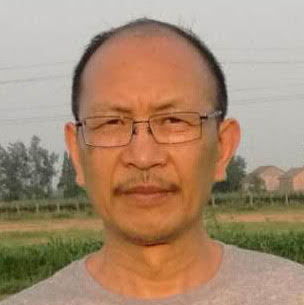