Under the Radar: Sultana’s Dream

There are a few texts that come up again and again in discussions of early feminist utopian fiction — Man’s Rights by Annie Denton Cridge from 1870, Mizora, by Mary E Bradley Lane from 1880-81, Arqtiq by Anna Adolph from 1899 and perhaps most famously, Charlotte Gilman’s Herland from 1905.

But these were all stories from the western world, stories that were part of a surge of utopian fiction written by women leading up to the women’s Suffrage movement of the early twentieth century. But what of the east? What of the countries that were not just weighed down by patriarchy, but colonialism as well? Did any of them create any important feminist narratives?

As it happens, they did. Rokeya Sakhawat Hossain’s short story Sultana’s Dream from 1905 remains a prominent and important example of feminist fiction, especially since it was written by a woman in the subcontinent — an area that is still trying to shrug off the dirty overcoat of patriarchy and colonialism. Hossain’s story is a charming, funny and sharp analysis on subcontinental life at the time, especially for the Muslim women for whom it was the norm to remain illiterate and in purdah.

Sultana’s Dream was written in English (which was far from Hossain’s second language — she probably spoke at least Bengali, Urdu and possibly read Arabic and Farsi as many of the richer Muslims in the subcontinent did, before she wrote in English), while her husband was away for work so that she could show him how her skills in the language had grown.

It was printed in The Indian Ladies Journal that same year. It begins with an unnamed narrator (‘Sultana’ here is a title, though in the subcontinent it is can also be a name) who may or may not have fallen asleep in her ‘easychair’, thinking about the state of Indian womanhood. She looks up to see someone who resembles her friend Sister Sara and walks with this woman into a world unlike anything she has ever known. They are in Ladyland, Sister Sara explains, is a utopia run by women, where all civic duties are managed in a few hours, thanks to the extreme efficiency that comes naturally to the women, leaving the rest of the day to be used to develop more important things — art, science, beauty.

There are only women to be seen in public and Sister Sara explains how the men entered purdah readily, after being heavily wounded in war and presuming the country was lost. Of course, once the women were able to take control, they won the war easily and with science, not brute force. In fact, the war is won by university students and not soldiers: ‘Then the Lady Principal with her two thousand students marched to the battle field, and arriving there directed all the rays of the concentrated sunlight and heat towards the enemy’. Brain over brawn, Hossain makes clear right away.

With the war won by the cleverness of women, it was only natural that they continue to manage Ladyland entirely, leaving men in the mardana (the male version of the traditional female space of the zenana, ‘mard’ being the Urdu word for male), where they tend to the domestic chores, since no one can trust these ‘untrained men out of doors’. This aspect of reverse-segregation of the sexes in Sultana’s Dream has influenced a great many writers and in particular, this idea of the mardana has most recently influenced fantasy writer Kameron Hurley’s book, The Mirror Empire. Hurley frequently points out the importance of Sultana’s Dream on her work and on feminist SFF.

It’s interesting that Hossain slyly pointed out back in 1905 what is often discussed now, particularly in the subcontinent — why should women be taught to stay safe, when men are not taught to not threaten or abuse or rape or be a danger to women? The idea of restricting women in the zenana (or even in forced purdah) by men for their own protection from men is completely absurd — just as much back then as it is now, and Hossain isn’t afraid to point out that ‘it is not safe so long as there are men about the streets, nor is it so when a wild animal enters a marketplace.’

When the narrator of the story innocently repeats what women were often told about men, ‘Even their brains are bigger and heavier than women’s. Are they not?’, her new friend tells her, ‘Yes, but what of that? An elephant also has got a bigger and heavier brain than a man has. Yet man can enchain elephants and employ them, according to their own wishes.’

Hossain doesn’t just subvert the traditional role for subcontinental women in the Twentieth Century, she is downright disdainful and critical of women who have allowed themselves to be trapped within a limited role. Her narrator explains her Calcutta to Sister Sara by saying, ‘We have no hand or voice in the management of our social affairs. In India man is lord and master, he has taken to himself all powers and privileges and shut up the women in the zenana’, and when Sara asks her ‘Why do you allow yourselves to be shut up?’, she explains — like any ‘good’ traditional Muslim woman from that time probably would — ‘Because it cannot be helped as they are stronger than women’. The idea of a male dominated society existing because of brute force comes up here, but Hossain doesn’t abide by that. ‘A lion is stronger than a man,’ says Sister Sara, ‘but it does not enable him to dominate the human race. You have neglected the duty you owe to yourselves and you have lost your natural rights by shutting your eyes to your own interests’.

What makes Sultana’s Dream particularly pleasing as an early feminist text is the ease with which Hossain casually dismisses the myths perpetuated by parochial patriarchal systems of the time — she’s so confident in her belief that every aspect of male-dominated society can be challenged if women were to accept that there is more for them than basic domestic duties, so positive in her faith that the status quo can be challenged — it’s refreshing. It’s often reported that her husband read the story without even stopping to sit down, and at finishing it declared it to be ‘a splendid revenge’. Revenge upon whom, I do not know.

Hossain is also very aware of living under colonisation — and not just that of women by men but that of nations. The Queen of Ladyland tells the narrator, ‘We do not covet other people’s land, we do not fight for a piece of diamond though it may be a thousand-fold brighter than the Koh-i-Noor, nor do we grudge a ruler his Peacock Throne. We dive deep into the ocean of knowledge and try to find out the precious gems, which nature has kept in store for us. We enjoy nature’s gifts as much as we can.’ Interesting — and pointed — that she brings up two of the most valuable items plundered by the British Empire in the subcontinent — the Koh-i-Noor, a massive diamond mined in the 17th Century in India that became part of the Crown Jewels in 1877, and the Peacock Throne, commissioned in the 17th Century which no longer exists, though many jewels adorning it were taken by British colonialists and are presumed to be a part of part of the Crown Jewels. Obviously, Hossain was no fan of the British Empire or its presence in the Indian subcontinent, and she wasn’t afraid to say it.

Born to a Muslim zamindar (landlord) family in what is now Bangladesh, Hossain was married at 16 (a reported ‘love marriage’ — rare in those days) to a local magistrate who encouraged her to write in both English and Bengali about what she felt believed in. And what Hossain believed in was equality for women in every aspect of life. Women’s lives at that time — Muslim women’s, in particular, were very much spent in purdah, and in kitchens and homes, trapped entirely and only in domesticity. Hossain believed that women were held back by their lack of knowledge of their rights, often pointing out that women’s right as written in the Quran were no longer in effect, as a result of Muslim male conservatives. She was one of the earliest feminist reformers the subcontinent has known, writing a great deal about women’s empowerment in Bengali so as to reach a larger audience. When her husband died, she used the money he left her to set up a school for girls, and though she had to go door to door to beg people to let their daughters attend it at first, The Sakhawat Memorial High School exists in Kolkata to this day.

Hossain’s explanation for why women should have equal rights was simple and remains applicable, probably everywhere in the word but especially in the Indian subcontinent where women are struggling against a male-dominated society more so than in the west. ‘We constitute half of the society,’ she said, ‘If we remain backward can the society move forward? If somebody’s legs are bound up how far can she walk? Indeed, the interest of women and men are not different. Their goal of life and ours are the same.’ 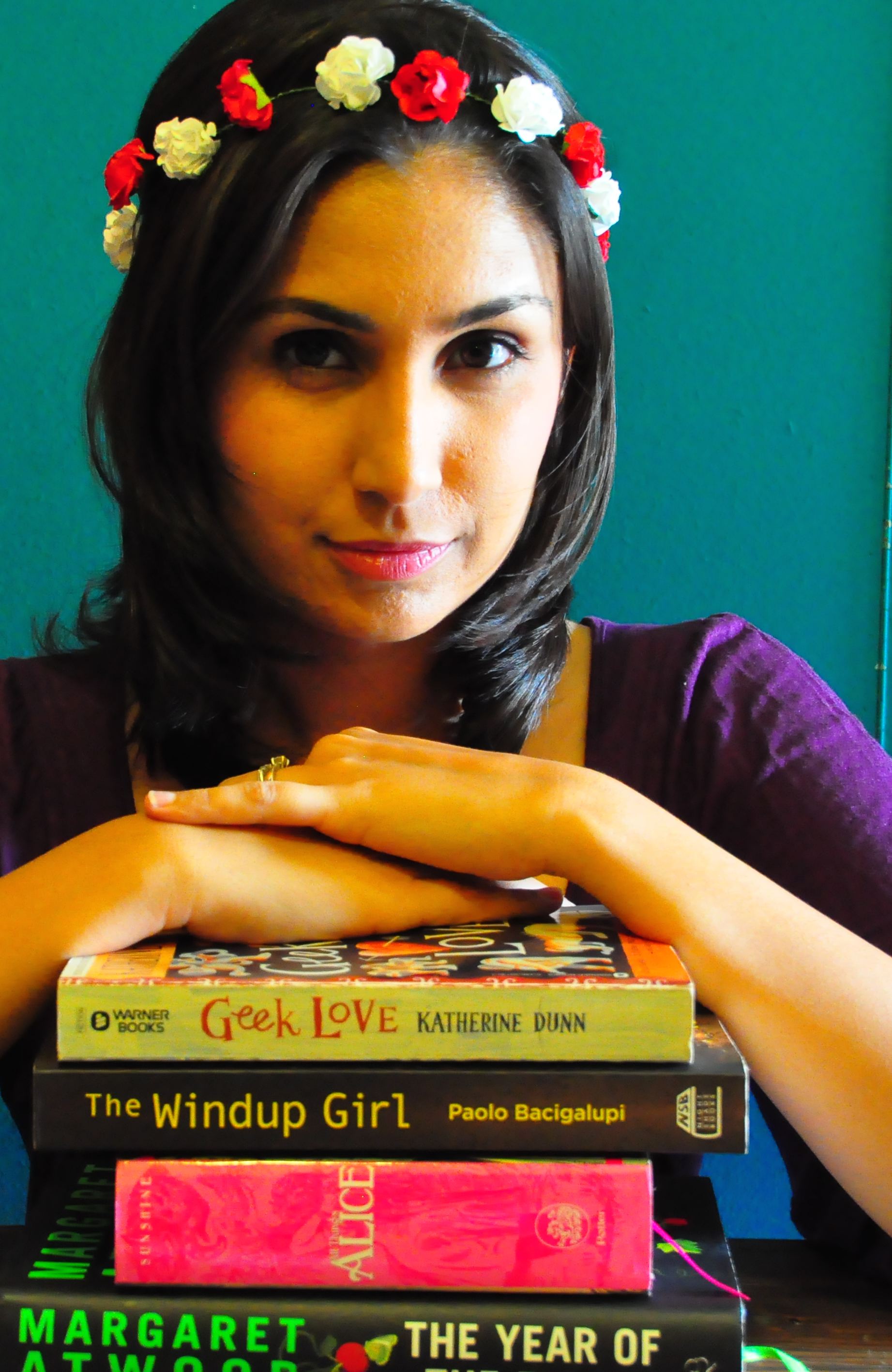 Mahvesh Murad loves dystopian fiction; appropriately lives in Karachi, Pakistan. She writes about stories; interviews writers the Tor.com podcast Midnight in Karachi when not wasting much too much time on Twitter.