“To hold contradictions in balance…”: Tashan Mehta’s The Liar’s Weave 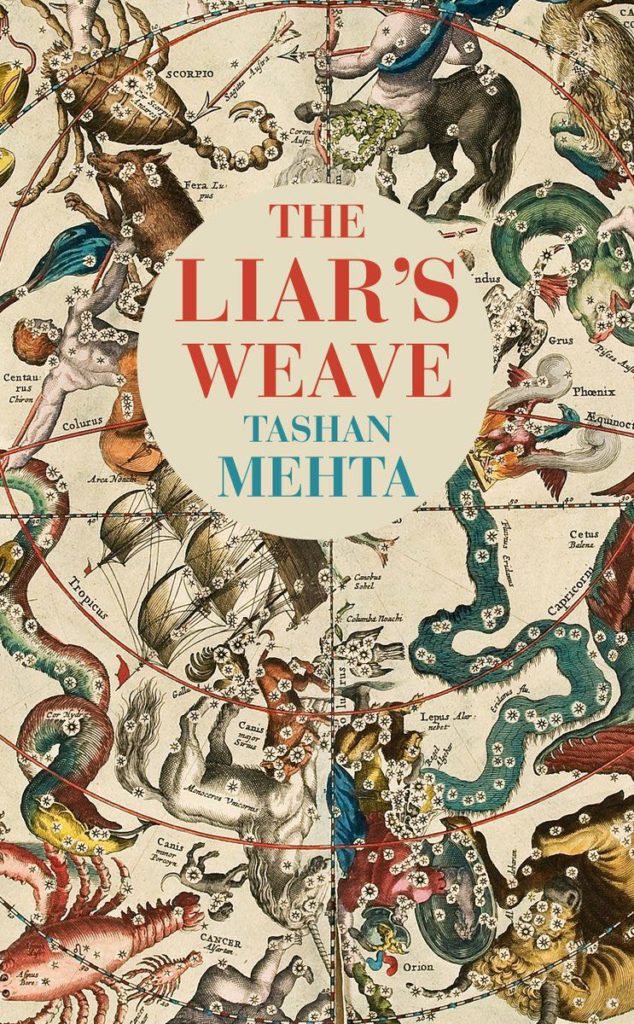 In his Introduction to The Architecture of Knowledge, Michel Foucault wrote of his experience reading Jorge Luis Borges: “…the laughter that shattered, as I read the passage, all the familiar landmarks of my thought—our thought, the thought that bears the stamp of our age and our geography—breaking up all the ordered surfaces and all the planes with which we are accustomed to tame the wild profusion of existing things.” The essay that Foucault was referring to was The Analytical Language of John Wilkins, in which Borges had invented a Chinese encyclopedia with a mode of taxonomy that cut disorientingly across the way in which our minds are conditioned to order and define the world. The Liar’s Weave, a debut SF novel by Tashan Mehta, is a story that performs that Borgesian task of confounding our categories. The old and outworn binaries of fate and free will, imagination and reality, order and chaos, and time past and time present, are here dissolved and reconstituted into a world that is sometimes confusing, often maddeningly overcrowded, and always delightfully unexpected.

Set in Bombay in the early 1920s, in the backdrop of the newly assertive Indian nationalist movement, The Liar’s Weave imagines a world where peoples’ lives are pre-ordained by the gods, though their individual birth-charts, and interpreted for them by an immensely powerful guild of astrologers, organized under the banner of seven universities (the Sapta Pari) and a (sometimes rival) Association. This is a world where the good luck of the “Fortunate” must be compensated by the ill-fate of the hatadaiva – the luckless: “Hatadaiva have drawn the bad lots, the running sand, the dark hours. They are the sacrifice demanded at the yagna of your fortune, several fed fatter for the slaughter.” (p. 121) And into this world falls the liar of The Liar’s Weave, Zahan Merchant: a boy with the unique power of creating an alternative reality through his words, a reality that is true for all except those who actually know that it is only the verbalized product of Zahan’s imagination.

Zahan’s powers bring him to the attention of the astrologers, alarmed by his ability to throw a spanner into the works of pre-ordained fate by lying alternate realities into existence (“…a universe already written cannot swallow the newly introduced.” (p. 75)) But they also bring him to the notice of Vidroha (literally: “revolt”), a hidden forest world of the hatadaiva, led by four ambivalent figures who are seeking for a way to overthrow the order of fate and destiny that consigns them to a pre-written future from which they cannot escape (“… he wants to defeat the gods. Which one of us doesn’t?” (p. 66)). There are shades of His Dark Materials here, but in their amorality, their violence, and their near-desperation, Mehta invests her rebels with far greater moral ambivalence than Philip Pullman – perhaps more akin to the original devil’s party in the Paradise Lost, rather than His Dark Materials’ more optimistic retelling.

Caught between the institutionalized power of the astrologers and the existential ruthlessness of the rebels of Vidroha, the two forces locked in a battle in defence of and against the established order, Zahan must find a way to manage and contain his abilities, while attending to the rather more elementary task of staying alive. And in this dim, shadowy and often violent struggle, an array of characters wanders in, upon (and sometimes out of) Mehta’s stage: Zahan’s elder brother Sohrab, empathetic, accomplished, and entirely ordinary; his best friend Porthos, whose birth-chart is mysteriously unreadable, and with whom Zahan discovers the world of Vidroha; Narayan Tarachand, the noted astrologer, never entirely at ease with his vocation, and who first discovers the incongruities in Zahan’s birth chart; Parineeta Bannerjee, reader of William Blake, and his preternaturally intelligent wife; Yaatri, whose prior existence as a banjara was wiped out when the colonial regime passed the Criminal Tribes Act, and who is now one of the leaders of Vidroha; Uma, a hatadaiva victim of brutal violence, and whose ruined hands a love-struck Zahan lies back into wholeness; and Vidroha itself, a forest that is alive and predatory. The world of Vidroha, centred around one of the “nerves” of the earth, the world of the Sapta Pari universities, tied up with fate and the future, and the historical world of 1920s Bombay, rub shoulders against one another, their boundaries dissolving and blurring (reminiscent, at times, of L J Smith’s The Night of the Solstice), much like the boundaries of the world that Zahan creates, and the world of “objective” reality, and past and future itself.

In its disassembly of categories, The Liar’s Weave is part of a long-established tradition in SF writing. It is strongly reminiscent of Adolfo Bioy Casares’ The Invention of Morel, where issues of perception and consciousness are explored through the motif of two parallel realities co-existing within the same observational frame (another similarity between the two novels is a wrenching plot twist at the very end, that makes the reader go back and re-read it all just to spot all the obvious signs that she had missed). And Casares’ dagger-sharp observations about the subjectivity of reality might equally be applied to the world Zahan weaves through his lies: “When all the senses are synchronized, the soul emerges…When Madeleine existed for the senses of sight, hearing, taste, smell, and touch, Madeleine herself was actually there.” (The Invention of Morel, p. 63)

Wisely, Mehta (like Casares) does not try to give us any final answers, but leaves the questions hanging. Ambiguity, in fact, is central to The Liar’s Weave, not only in its response to the epistemic questions about the nature of reality, but also to moral questions. The astrologers can read birth-charts and interpret them, but they cannot intervene and use their powers to change anything. This is, of course, a recurring motif, along the lines of Star Trek’s Prime Directive, or the law of non-intervention from the Strugatsky Brothers’ Noon Universe, caught in its own paradox: to observe is itself to intervene. In The Liar’s Weave, that position is undermined from the outset, when the nationalist movement presses up against the policy of non-interference: “I humbly request the Association to use our knowledge to read the future for our glorious nation, Bharat, and aid our courageous freedom fighters in defeating the British Raj.”(p. 36) For a while, the problem is staved off by invoking the inevitability of fate, and the powerlessness of the astrologers to change what is pre-ordained (as one of the characters sardonically remarks, “it would be a good way to control people, telling them to do something because they’ve already done it.” (p. 111)) Once Zahan’s powers are revealed, however, it becomes clear that powerlessness is no more a sanctuary, and the moral contours of the question become fiercely urgent:

“He cannot say, it is in the stars. He is living proof that it is not. He must set it right himself – create a world where there is an equitable distribution of luck. No fortunates, no hatadaiva. Only objects, swinging in a thin spectrum of justice.” (p. 287).

That dilemma, however, is left unresolved, because everyone runs out of time. And here perhaps is the one weakness of The Liar’s Weave. There is a sense, at times, that the crowded stage is too crowded, that the rapid pace of events is too rapid, that there is more irresolution than entirely satisfactory, because – in a novel that undermines our categories of time and space – Mehta simply doesn’t have enough of either. The nationalist struggle (and the broader political sub-context) enters the fringes of our consciousness from time to time, but disappears entirely for large parts of the book – belying the initial expectation that it would serve as a framing device. Tarachand’s clumsy experiments with love are fascinating, a brilliantly effective counterpart to the darkness of the ongoing conflict, but not quite explored to the fullness of their potential. And while the main characters are complex, layered, and agonizingly human, there are also those who seem to have received a far more impressionistic treatment. There are moments where The Liar’s Weave – with the limited autonomy granted to all novels – seems to have briefly escaped the control of its creator. It is almost as if Mehta, whose knowledge of and familiarity with Indian mythos is evident, is almost struggling to fit all of it into the limited canvas of the novel form.

But you could almost forget that and lose yourself in writing that, like the forest of Vidroha, is lush, dense, and with a rich sense of place. The dissolving of boundaries that is at the heart of The Liar’s Weave is reflected in its form. This is a novel that speaks through images, images that are often unusual, applied to actions in a manner that is non-intuitive enough to be striking, but not outlandish enough to snap under their own stress. “There are so many vines, he is breathing leaves.” (p. 25) “Memory is his enemy – he weeds it, uprooting belladonnas and planting his lilies.” (p. 94) And my own favourite: “The earth has cracked between them. He wants to fill it, but all he can find is loose soil. Step into it and you’ll be plugging your ears with mud, nostrils filling.” (p. 270)

After his order-breaking laughter, Foucault would go on to note “a certain uneasiness that I found hard to shake off.” In its collapsing boundaries of form and content, the world of The Liar’s Weave creates its own, almost eerie, sense of uneasiness – an almost-vertigo, at times. And perhaps that, indeed, is what makes it such a memorable debut.