Contingency Plans for the Apocalypse by S.B. Divya 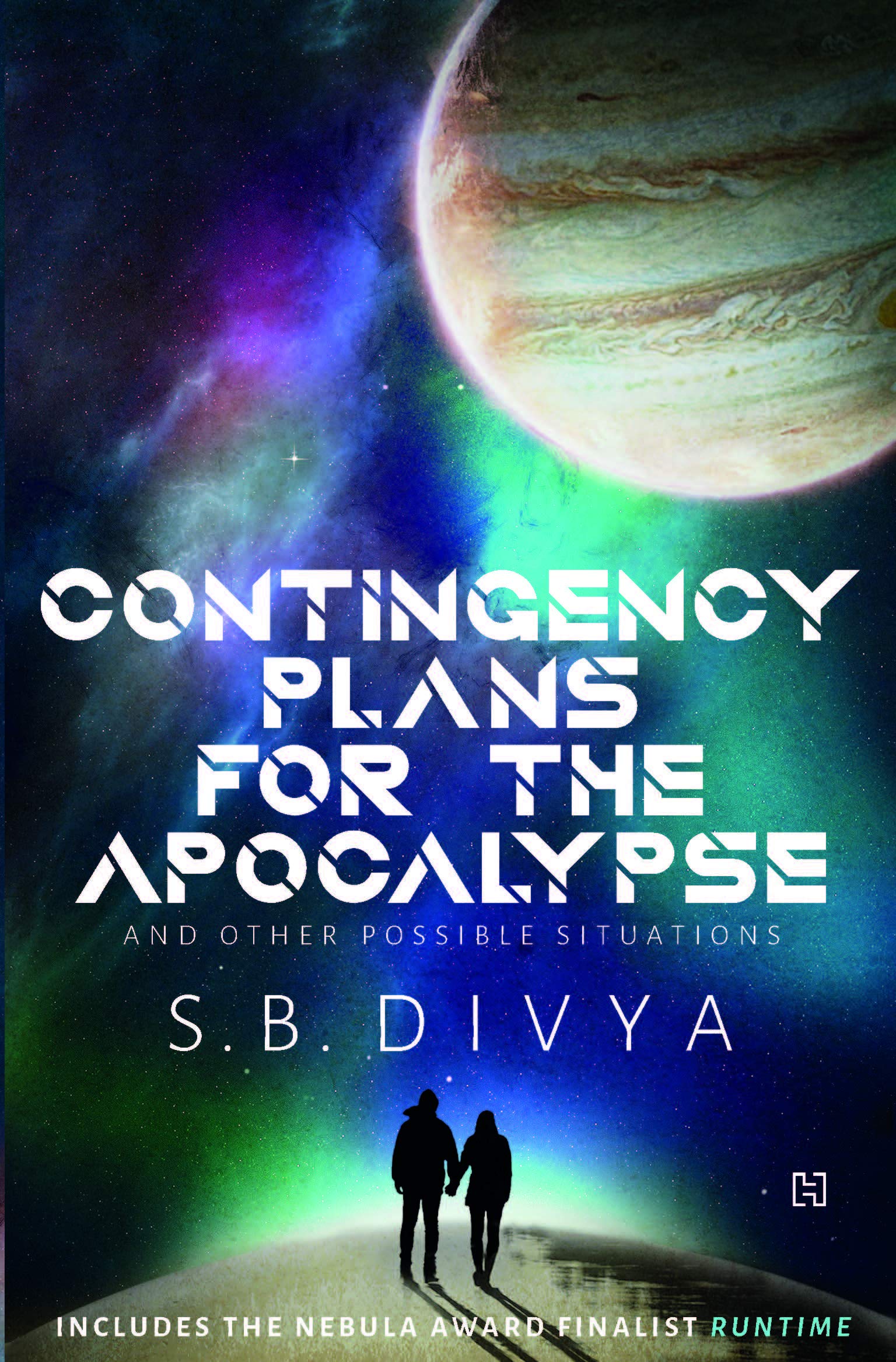 In late-November, as a pall of smoke hung over the cities and the countryside of Northern India, there came the news that the first “Oxygen Bar” had been launched in New Delhi. Some enterprising entrepreneurs had decided to be the first to monetise the environmental crisis – and tried to privatize the air through the use of the latest technology on offer. Bleakly hilarious as it is, the story of the Oxygen Bar lies at the intersection of three of contemporary India’s defining characteristics: an environmental crisis, an obsession with technology, and an enduring class and caste structure that continues to stratify society and shape identity in a publicly visible manner.

That intersection is what unifies the thirteen short stories and one novella that make up S.B. Divya’s Contingency Plans for the Apocalypse. These are stories that have appeared in disparate – but familiar – online spaces over the last five years: Lightspeed Magazine, Uncanny Magazine, Tor, and so on. For readers unfamiliar with Divya’s work, the anthology assembles these stories in one place. But even for those who have encountered them before, they acquire a different valence when placed in the company of each other, like little strands of light that come together in an illumined web. It is the title, perhaps, that gives us the best snapshot of that web: the apocalypse – and we all know what kind of apocalypse – is within touching distance, we need to have plans in place – but not everyone will be lucky enough to be a part of the plan. It has ever been thus.

Contingency Plans for the Apocalypse has a wide sweep: it introduces us to human-machine hybrids, racked by nostalgia, memories of failure, and ethical conundrums (“Loss of Signal” and “Binaries”), and to space-faring post-human consciousnesses, changing forms and traveling between suns (“Nava”); it takes us from drone attacks in a future Arizona (the eponymous “Contingency Plans for the Apocalypse”) to sages’ curses in the ancient India of the Vedas – with a twist (“An Unexpected Boon”). A failing marriage gets snagged in a conversation between alternate universes (“Dusty Old Things”), while a love story in and around the pollution-foamed lakes of a ravaged Bangalore runs into a problem when it turns out that – apart from class differences – one of the protagonists must live her life in an isolation suit (“Microbiota and the Masses”). Staying with the theme, a third story asks whether love is possible when the future can be seen (“Ships in the Night”), while others tests the question in the context of space-and-time travel (“Strange Attractors”) or cryogenic-technology induced near-immortality (“Soft We Wake”).

More along the fantasy side of the spectrum, we find out if, in a world where every child “manifests” special abilities, the gentleness of flowers mean anything before the spectacle of lightning bolts (“The Boy Who Made Flowers”). And then there is the closing novella, “Runtime”, that weaves together several of the themes that come before: in a brutal, near-future, dog-eat-dog world, a cyborg limbs-fueled race through the Sierra Nevada mountains is one woman’s ticket to a college degree and life with dignity. But how much is she willing to sacrifice for a chance at victory?

Contingency Plans for the Apocalypse is reminiscent – in some ways – of Ken Liu’s The Paper Menagerie and Other Stories. There is the same grand sweep of time and space – but always framed within the same concern for the most human details of life – the desire for acceptance, the sense of self, the striving for love. Divya’s style alternates between the understated and the elegiac, a fit tone for the themes that run through her stories. In the words of Colm Toibin, it “in its detail and its dialogue, its slow movements and its mystery, it [stands] against abstraction, against the greyness and foolishness of large concepts.”

This is not to say, of course, that the large concepts aren’t there: there is nothing unambitious about space and time-travel, post-humanism, or – for that matter – the climate. But in Divya’s hands, these concepts are never ends in themselves, but prisms through which human experience comes refracted to the reader. Like the best speculative fiction, these stories are human at their heart, while encouraging us to think what it is to be human when the background conditions that structure our world are tweaked in ever so slight, ever so predictable, but ever so consequential ways.

Where else do we locate Contingency Plans for the Apocalypse? There has been some debate in recent months over whether there exists a distinct writing endeavour that can be accurately described as “South Asian speculative fiction” – along the lines of Afrofuturism, Africanfuturism, or Chinese SFF. Is there a coherence to the contemporary speculative fiction that is coming out of the several South Asian nations – a unity of theme, or style, or topics? Given the diversity within South Asia – and indeed, the diversity within its constituent nations – this seems a tall order, even if we confine ourselves to works written in the English language. And yet, certain themes have begun to emerge – themes that perhaps no South Asian writer can entirely ignore, themes that cut through the differences and present similar challenges, no matter where you are in South Asia.

In a recent essay [for The Caravan], I suggested that a post-colonial developmental resource extraction model that is finally running up against the climate crisis, and a legacy of social stratification, are two of those themes; as indicated at the beginning of this review, these themes are always present – whether in the foreground or in the background – in many of the stories of Contingency Plans for the Apocalypse. Indeed, readers familiar with the recently published Gollancz Anthology of South Asian Science Fiction will find overlaps between some of the stories published there – Anil Menon’s and Vandana Singh’s, for example – and the stories of Contingency Plans for the Apocalypse. The meeting point – unsurprisingly – is our future in a period of rapid and precipitous environmental degradation.

Dystopia is a common – and frequent – response to such a state of the world, and it is perhaps interesting to observe, in that regard, that very few of Divya’s stories are set in identifiably dystopian worlds. There are some, of course: we probably won’t like to live in the bleak – but terrifyingly familiar – world of “Runtime”, but other than that and the eponymous story, Divya is interested more in the shape of human life, in its adaptability, but also its continued preoccupation with the same questions in the teeth of changed conditions (whether for the better or for the worse), than in painting bleak pictures of the future. Divya does not, of course, peddle utopias either; but at a time when world-historical problems seem to call forth world-historical responses from speculative fiction – whether in the shape of dystopia or (far less frequently) utopia, Divya’s human stories are a little quiet interlude in a roiling universe.