When I was about thirteen (the year after the Golden Age of science fiction, as the saying has it), my favourite science fiction novels were these two: Vasily Aksyonov’s first novel, Colleagues (1961), and Eternal Wind (1975) by Sergei Zhemais. I don’t remember how I found them, but in those years—this was the early 90s—there were frequent book fairs and sales in Colombo that heavily featured secondhand Russian novels from the preceding decades. (Imagine rivers of books drifting south, undammed by the fall of the Soviet Union.) The Zhemais was a squat hardcover in decent shape but for a slight tear at the spine; the Aksyonov was a paperback, heavily chipped, on the verge of losing its cover. They were both old books, foxed and much lived-in.

My characterization of them both as science fiction novels is contestable, certainly. One is straightforward: the Zhemais is what would today be considered a YA SF novel about a scientific community of people on an artificial island trying to communicate with whales and dolphins. But the other is less so: the Aksyonov is about a bunch of medical students, freshly graduated and trying to fit into the real world—going off to work in distant rural areas, or joining up as ship’s doctors. It’s ostensibly a “realist” novel, but I didn’t see it that way at the time. I still don’t, actually. It seems like the wrong distinction to make.

What I loved about these books is what they had in common, this beautiful blue-shifted Soviet optimism. “I want to capture the many fleeting expressions on the faces of my youthful contemporaries—those who ride in trams and make their way on foot, those who are building towns in the taiga, those who are training for flights into space.” That’s Aksyonov talking about his book, the one without robots or artificial islands. It comes from that particular time and place when real people like Korolyov and Glushko did utterly science-fictional things, and even though I was reading it as the dream of the USSR crumbled, it managed to transport me across the thirty intervening years to a place where the dream was still alive. Communism, the future, space—no, I had it right at thirteen, that was science fiction.

Where the Aksyonov is set firmly in the spring of 1956 and gradually discovers its science-fictionality by looking forward into a space-traveling future, the Zhemais begins with its artificial island: a blatantly science-fictional premise set in a somewhat indeterminate future (not too near, not too far). Only through hints and backward glances does this future fit itself into the world of the Cold War. In this way, the worlds of the two books blur into each other. When Yegorov in Aksyonov’s Colleagues (living in his small town which is new to electricity and only just got its first doctor, rural Kruglogorye that dreams so hard of becoming Kruglogorsk) predicts that his grandchildrens’ homes will be powered by atomic energy, it seems like the world he’s describing is the exact one in Eternal Wind where Kostya, Ive, and Biata drive jet-boats, talk to dolphins, and explore the broken-down missile silos of a forgotten war. This was a future that I could still recognize from the vantage of the early 90s, even if only as a future that had just died.

The Zhemais sets its artificial island in the Indian Ocean and so it mentions Colombo in passing. The scientists need something sent down from the port in Colombo. I can’t remember the details but it was a very minor reference with the city only named once, with no elaboration of what’s actually going on in the Colombo of the novel.

If Sergei Zhemais had gone so far as to research international headlines about Colombo while writing the novel, he’d probably have heard about the failed Maoist uprising in 1971 and the first republican constitution in 1972 (where we finally freed ourselves of the baleful glare of Elizabeth II, having continued to be a “dominion” for a quarter-century after independence from the “empire”—these are all varieties of euphemism for “the long obscenity, punctuated by atrocities, committed on this island by the British since the Treaty of Amiens,” q.v.), but there’s no indication that his implied future Colombo is a troubled or violent place, or alternatively, a tropical paradise (the conjoined clichés of all writing about Sri Lanka, even today). It wasn’t rendered exotic, condescended to, or tut-tutted over for being fucked up: it wasn’t the Ceylon of “the spicy breezes blow soft o’er Ceylon’s isle; though every prospect pleases, and only man is vile” (from an actual hymn written by some British asshole in 1819—the very year after the 1818 Uva massacre, for maximum irony, when the British finally managed to kill enough people to conquer the whole island).

No, Zhemais just referenced it because Colombo was the nearest major port to his fictional island. The funny part is that I noticed it so intensely, this one throwaway line, that I remember it to this day. It was the first time I’d read a science fiction novel showing a future that included my city in it, and it didn’t even need to be on fire.

This essay first appeared in Lightspeed’s Kickstarter for the People of Colour Destroy Science Fiction anthology. Reprinted here with permission. 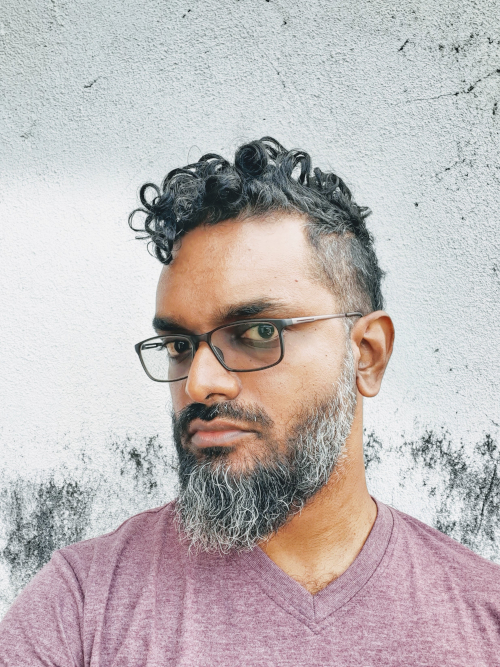 Vajra Chandrasekera is from Colombo, Sri Lanka. His short fiction has appeared in Flapperhouse, Unsung Stories and Juggernaut, among others. You can follow him on Twitter at @_Vajra or find more stories at vajra.me.