The world’s a mess. How do thoughtful people make sense of it all?

In this series by The Conversation, authors suggest a book, philosopher, work of art – or anything else, for that matter – that will help to make sense of it all.

Back in the 1990s, some speculative fiction bookshops sold a T-shirt with the slogan, “Reality is for people who can’t cope with fantasy”. Today, bookshops are almost extinct, while fantasy geeks can link to 3-D printers to fabricate their T-shirts.

Speculative fiction consists of multiple varieties, with fantasy and science fiction the two major streams. It has often anticipated new technologies – but that may be the least important reason why reading speculative fiction helps us make sense of the world.

Some writers deny their work belongs in either fantasy or science fiction. Among them, ironically, Margaret Attwood, whose own 1985 “Handmaid’s Tale” time-travelled to the site of some of its own dystopian speculations when Donald Trump became US President in 2017.

While science fiction and fantasy ask that most powerful question “What if?” – they also deal with “This, now”: reflecting it, interrogating it and satirising it.

Speculative writers flesh out our passing thoughts into complete, functioning societies and explore how they might unfold. For example Kim Stanley Robinson looked in “New York 2140” at what if global warming flooded Manhattan.

Or, what if a world without gender shaped a language to match, as in Ann Leckie’s award winning “Ancillary Justice”? Leckie, considering her linguistic experiment – all her characters take “she” – notes how this writing tactic affects not only on imagination, but also on the experience of readers in the here and now:

… because it doesn’t use the default gender pronouns, a lot of readers found themselves very aware of the fact that a default was being used, and it wasn’t the normal one… a really interesting experience.

Linked to this, speculative fiction is free to unleash the full power of metaphor. Richard Morgan in “Market Forces”, for example, makes literal the rhetorical assertion that global investment bankers have blood on their hands.

It is the particular gift of genre fiction to assume a different background to the mainstream and so delineate character from a different angle. Science fiction carries this change of perspectives to extremes. By changing what counts as figure and what as background, the characters can be seen in ways otherwise impossible – and so, ultimately, we can understand ourselves in ways that would otherwise be impossible.

And the borders of “understanding ourselves” are widening. Nnedi Okorafor, Tade Thompson, Jemisin and many others provide examples of Afro-futurism freed from the ethnographic distorting mirror of Black Panther. They follow on from predecessors like Octavia Butler, Samuel R. Delany and Sun Ra.

Just as Okorafor in “Lagoon” and Thompson in “Rosewater” take us to Nigeria to illuminate the “what-ifs” of that society for Nigerians themselves, so the works of Liu Cixin, Xia Jia and multiple other Chinese speculative writers unfold Chinese concerns.

It’s not about better plans from the government or magical fairies coming down to save us. Change comes from (…) trying to convert the tools of cold, impersonal technology, of globalised capitalism, into our own freedoms.

Sometimes, critics reduce speculative fiction to the dystopian visions of past and future presented in the macho and often Eurocentric massacres and rapes of Grimdark military fantasy. Or, they conflate the genre with the thinly disguised right-wing survivalism of much post-apocalyptic SF. But that isn’t all there is.

Yet fiction writers make conscious choices about what elements they abstract from the real – and how to use them. There are multiple scholarly explorations of these arguments. Let’s just say here that engaging in fabrication and simultaneously arguing that what has been fabricated is “real” rests on very shaky terrain.

Further, as science fiction author Kameron Hurley argues in her riposte to the tropes of military fantasy sometimes the veracity of the elements writers select is itself shaky. Sometimes they represent arbitrarily Eurocentric picks from a near-infinite landscape.

For a writer such as Aliette de Bodard, of Vietnamese heritage, it’s Annamese dragons that pervade her steampunk, fin de siecle Paris. It’s emblematic of the corrupting history of French colonialism. Introducing such new tropes challenges conservative myth-making. She says:

Because we only talk about heroes, we like to think that, back then, we would be among them. And the truth is – most of us wouldn’t. Actually, most of us aren’t, today (…) we buy cheap clothes, cheap electronics made with labour in horrific conditions.

The potential to contest is even more striking for those supremacist extrapolations from present to future. Much research suggests that after disasters, people actually get together to help one another.

Speculative writers such as Cory Doctorow react against the way this is under-reported. What if, Doctorow asks, post-apocalypse,

instead of your neighbour coming over with a shotgun, they come over with a covered dish?

His novel “Walkaway” (and Robinson’s “New York 2140”) look forward to just such futures.

Speculative fiction provides vivid cases to provoke debate about such issues and thus helps us “make sense”. Maybe it’s time to wear the T-shirt again, but with a new slogan:

Reality isn’t what you think it is.

This article is republished from The Conversation under a Creative Commons license. Read the original article. 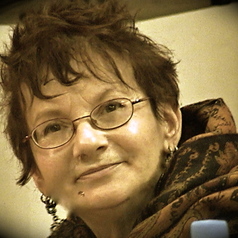 Writer Gwen Ansell, author of Soweto Blues, is an associate of the Gordon Institute for Business Science, University of Pretoria, where she lectures on writing skills for the Doctoral Programme and edits selected academic and practitioner publications. In 2008 she was Louis Armstrong Visiting Professor at the Columbia University Center for Jazz Studies in New York.