The Kiss of the Water 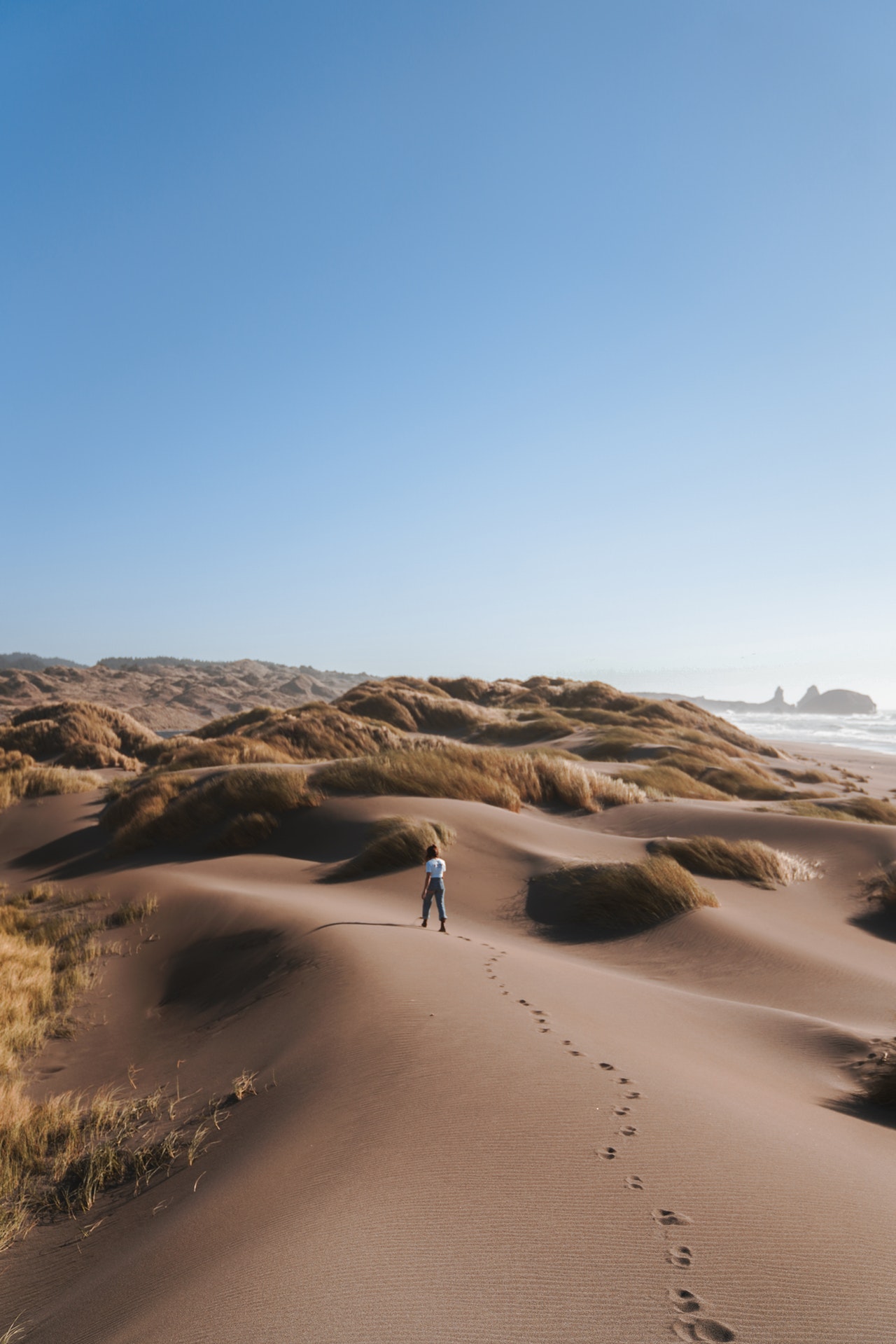 Translated from Spanish by Toshiya Kamei

Lima cleared stones from a false tumulus and buried her bare hands in the sand, which was scorched by the sun whipping mercilessly across Eastern Terra like a beast-god’s worst curse. Lima believed in such a curse. Once, enveloped in a curtain of steam, a woman with a cat’s head appeared before her eyes. That was Bastet of the West. After that, she’d leave a bowl of milk in the glade in the ravine.

Despite the offerings, however, she wasn’t spared divine wrath. Some misfortune was bound to befall her. After all, in the mining settlement, the guards made sure everyone understood that the Daonais were never wrong. Then and there, she was quite willing to throw herself at the feet of anyone capable of invoking dark clouds over her head. However, as always, a crystalline blue sky spread out above her.

Her fingernails had begun to bleed when she grasped handfuls of gravel. Lima trembled. The sand was wet, kissed by the water. She dug a little more and found a large wineskin made of camelid hide. Flattened, the mouth was uncovered. Lima grabbed it ceremoniously as if she held a baby. Not a drop of liquid remained inside.

The Gentium woman would have cried if it hadn’t been for her depleted strength, her dust-filled eyes, and a sore throat. She found other pilgrim hideouts ransacked in Gravel Valley. Once again, the guards had combed through the area to empty the wineskins and leave the desert with the dirty job of killing faceless undesirables who dared approach the Hetta colony.

The Daonais didn’t want any dirty Gentiums from other parts of Eastern Terra in their colony.

Lima needed clean water, which brought life and no more stomach worms, like the ones swimming in the unhealthy pit in the mining settlement. Although they boiled the water, it was always contaminated with metal scraps. Lima got up with the empty wineskin in her hand and started on her way back home.

Next to the foremen’s barracks, a hovercraft supplied the reserve tanks that belonged to the guards who whipped the Gentiums in order to force them to hammer the rocks and extract minerals for the Daonais. Several Gentiums were piled up around the vehicle.

They watched with hungry eyes as the water dripped down the feed hose and fell onto the sand. If someone could put a wineskin there, he would be able to collect clean water. But the guards stood before the tank with rifles to keep anyone from stealing water from the Daonais.

Lima’s throat was so dry that every time she tried to swallow, thousands of spines pressed from the inside. She joined the other Gentiums, their eyes all fixed on the remains of the hose. The dripping water looked fresh. Lima inched forward.

One of the guards guarding the tank yelled at her. He held a hand to his gun and asked her what she was doing. Lima wanted to answer, but she couldn’t talk. She hadn’t been able to utter a word for months because the dust from the mine had gone deep inside her and damaged her throat. The healer warned her she wasn’t going to exist much longer.

In an almost predictable impulse, Lima jumped on the feed hose. She stuck her mouth on the rubber surface and sucked. The water was cold. She had never drunk it so cold. Pain stabbed her right side, it pierced her guts, and her lungs burned with every breath, but that wasn’t what caused her to detach herself from the hose and place the wineskin under the generous stream. The water was so crystalline that she could see through it. The guards grabbed her hair and threw her back on the sand. Lima, trembling and with a sore body, closed the lid on the wineskin, stood up, and ran as fast as she could.

Shots rang out, followed by screams. “Disgusting Gentium! Thief! You dung-smeared stone!” Lima ran like a desert storm sent by the beast-goddess Bastet of the West and reached the barracks. She opened Room 77 and fell to her knees beside the second bed, where a younger version of herself rested, her cheeks lit with fever and her mind consumed by delusions that she barely articulated with her chapped lips.

Lima felt dizzy. Her hands refused to obey her, but she forced herself to focus. She searched her belongings for the medicine the healer had prescribed for her daughter’s fever. He told her to use it with clean water, the purest kind that existed, the Daonais’ water. The healer didn’t have that water in his possession, but he knew the pilgrims helped the villagers by hiding stashes of goods in Gravel Valley.

Lima found the capsule. She opened it with her blood-stained fingers, threw the powder into the wineskin, and stirred it. But her daughter wasn’t able to drink it on her own, so the woman took a generous sip and leaned over the girl to give her a kiss of the water.

The guards found the thief lying next to a young girl. In the next few hours, they’d recover from fever. Blood trickled down from Lima’s gunshot wound and into the uncovered mouth of the wineskin, which wasn’t completely empty now.

Malena Salazar Maciá was born in Havana, Cuba, where she still lives today. A winner of multiple literary awards, she has authored several books, including Nade (2016), Las peregrinaciones de los dioses (2018), and Aliento de Dragón (2020). English translations of her short stories have appeared in venues such as 4 Star Stories, Coffin Bell, The Future Fire, and Selene Quarterly Magazine. In addition, her work has been translated into Croatian, German, and Japanese.
Toshiya Kamei