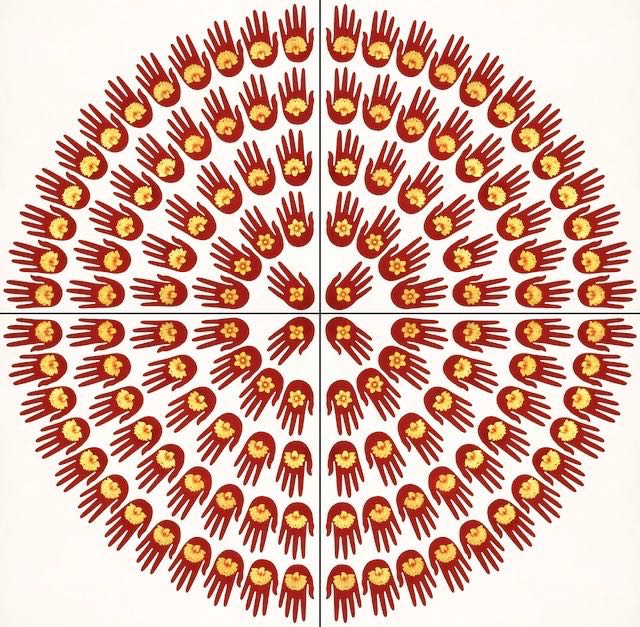 In 1989, when Olivia Fraser moved to Delhi with her then fiancée and now husband Willam Darlymple, it was evident that all things in the universe were ultimately connected. Her kinsmen, William and James Baillie Fraser, famous Company School art commissioners who had produced brilliant depictions of Indian life, had already forged a Fraser connection with India in the early C19th. Fraser followed their footsteps and her early paintings of architecture, portraits and everyday scenes in India show the use of similar brushstrokes and a similar vision to that depicted in the Fraser Album of her forebears.

Her recent sets of paintings suggest that Fraser has travelled a long way since the 1990s. What comes across strongly in her latest work is her mastery over the disciplined process of miniature art making and a deep conceptual familiarity with Indian spiritualism. Beginning in 2005, Fraser immersed herself in the Rajasthan tradition of miniature art making under masters from Jaipur. She also immersed herself over the years in the practice of yoga and found that both disciplines fed and complemented each other. The meditative quality of her recent art, which entails repetitive Indian motifs of lotuses and chakras, is hardly a coincidence. Fraser explains, if preparing the handmade paper and crushing natural materials, requires meditative concentration, the reproduction of the technique in which a motif such as a lotus or a chakra is drawn in a particular way also requires deep deliberation. 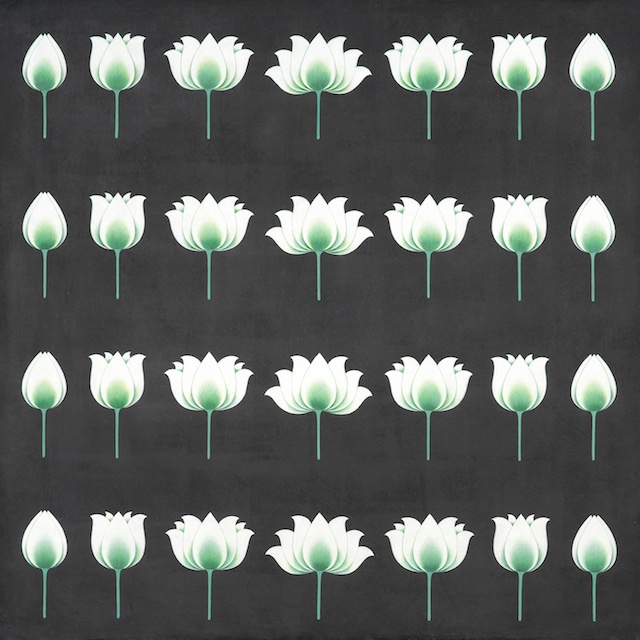 ‘Breathe,’ ‘Breath,’ ‘Pause,’ and ‘Prana’ in her recent collection Sacred Garden are therefore meditations in a dual sense of the word. Fraser repeatedly uses four different forms of the lotus — as a bud, in two different stages of blooming and as fully bloomed — to encapsulate the concept of breathing and life. If the folded lotus bud encapsulates the single moment in the process of breathing, it also encapsulates on its own all the techniques of miniature art that have gone into its depiction. 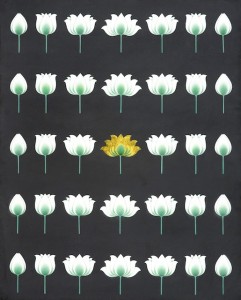 Not only so, the repetition of the motifs and the standard techniques in the depiction of the motifs mimics the repetitive act of breathing. In ‘Prana,’ the single fully bloomed lotus in the centre of the piece engraved in gold is depictive of the ebullience and richness of Indian miniature painting but also the reminder of the vitality of life.

It is also the encompassing nature of both life and art that finds expression in Fraser’s work. Like in her other piece ‘Yantra,’ where thousands of lotus petals disperse from sides of a 26”x 26” handmade paper, ‘Chakra’ gives a sense of optical illusion. The red hands engraved with lotuses in four concentric circles on four 36”x36’’ handmade paper pulsate; the vibrant colours of the piece reach out as if to hold or embrace the viewer. While each hand is drawn with the careful attention of a skilled miniaturist, the multiplicity of the hands speak of the multitude of humanity itself and the possibilities of work, art, play and life that many hands make possible. 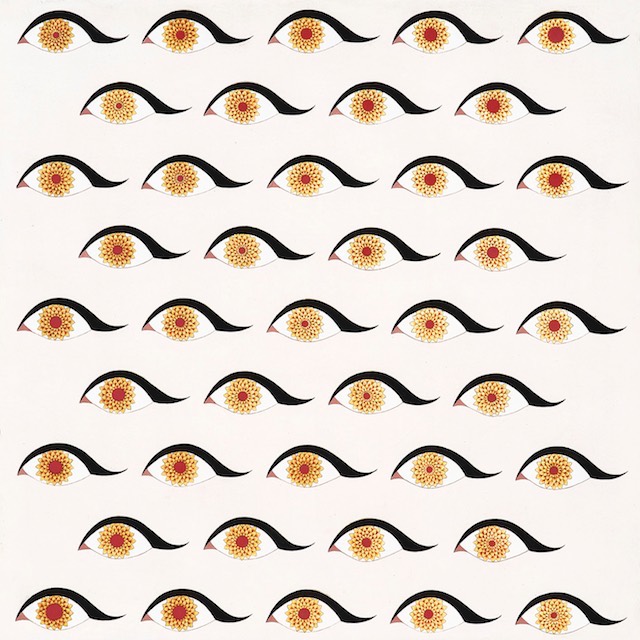 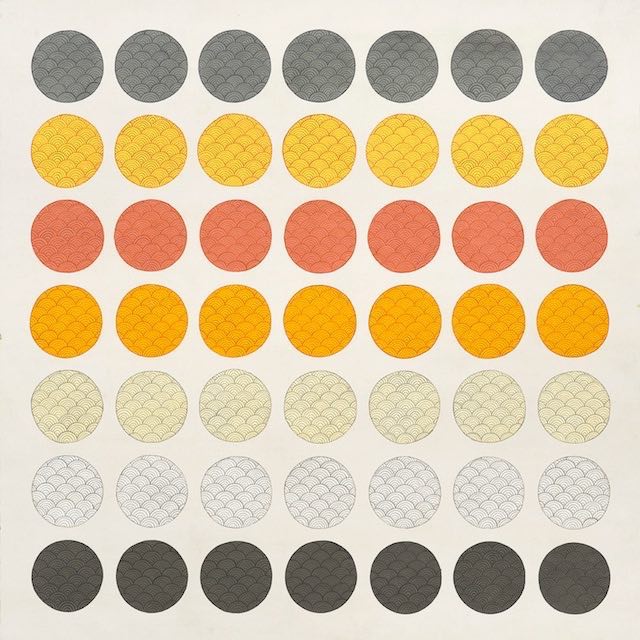 Fraser’s style is unique. Many would ask whether it would constitute miniature art. Is not the minimalism and scale of her art a complete anathema to the ornamental richness and minute size of traditional miniature painting? In her contemplative and detailed treatment of a single motif such as a lotus petal, she shows a deep respect for the techniques and tradition of miniature art making which she treats as a ‘language’ to explore and communicate with. Fraser does not get bogged down by a dogmatic notion of tradition and is willing to draw on the fluid and interconnected world around her to define a distinct aesthetic and style of her own. Her art is a powerful assertion of the dynamism of art and of life itself. 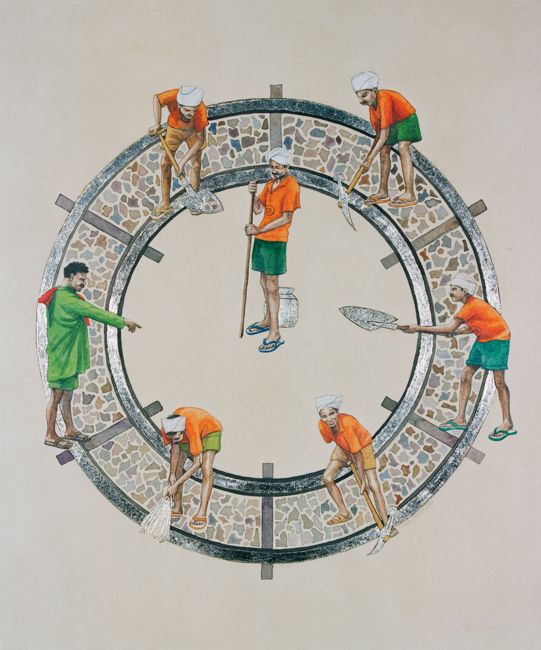 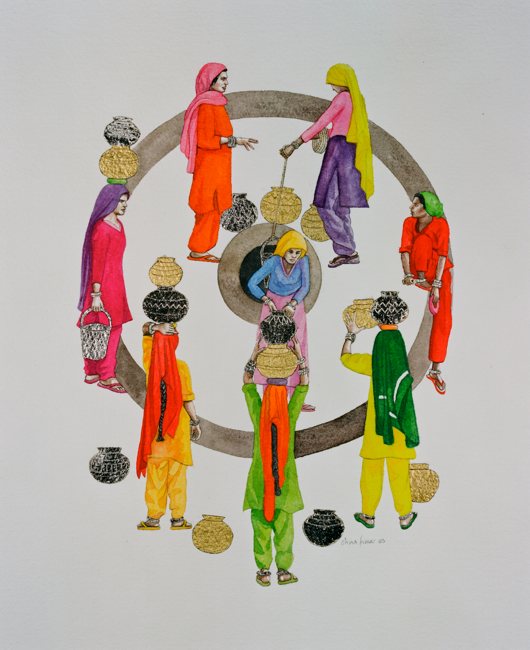 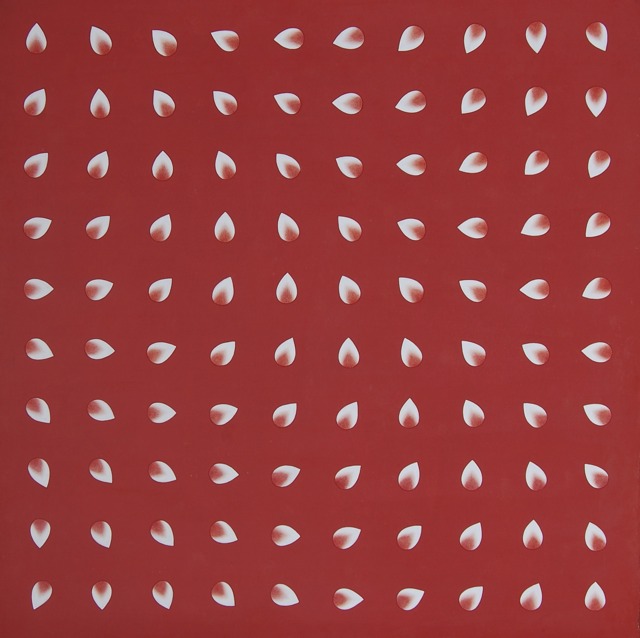 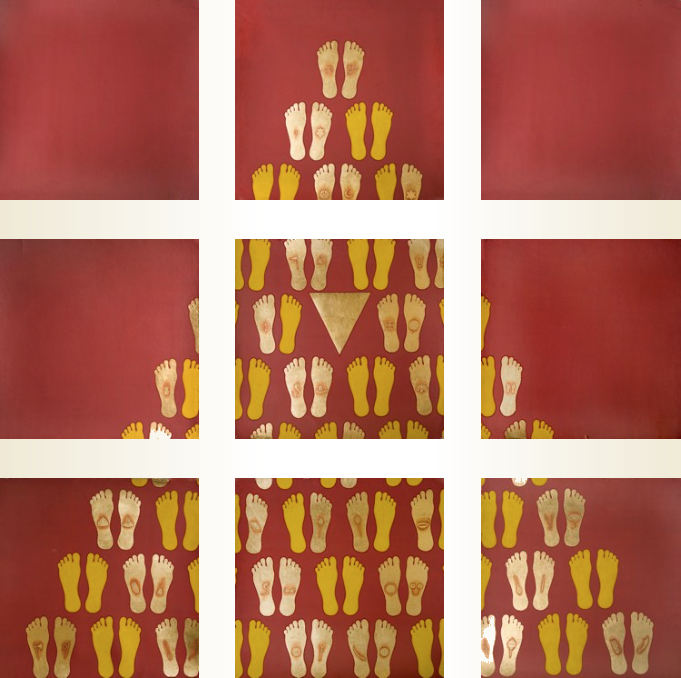 You can find Olivia Fraser at OliviaFraser.com.