Some kids from the neighbourhood are bursting firecrackers
by the side of our compound wall. Grandmother is
screaming at them. Mother smiles knowing
they won’t listen. Grandfather once stayed up
late in the night at the window of the first floor
waiting for the drunk who pissed on our wall
every night, so he could slosh a good whole bucket
of cold water over his head in the frosty winter night.
He’s been dead since long, our grandfather.
But grandmother hasn’t forgotten the battered face
of the man who was tied to a post outside the house
for having beaten his wife to a pulp. And grandfather
lunging his fists on the poor man’s face. Grandmother
by the window thinking if she had married a monster.
Most of all, the face of her young husband during the time
of the revolution when she went to see him in the lockup,
where he was hung naked upside down for two days,
with mud shoved in his mouth by the Bengali Inspector who
kept saying, Feed him the land, that’s what they are fighting for.

Somewhere near the borders to a warless country
stands the house my grandfather built.
Tired by the day’s work, my mother
has already fallen asleep in front of the television.
My father is noiselessly setting up
the mosquito net above the bed.
During the day, the town rife with revolution,
dreams of a new state.
They have licked the salt of freedom
and cannot unlearn the taste.

Someone I used to know gets shot
an inch above the ear in a crossfire.
My mother imitates that foreign tenor people acquire
while breaking news of unfortunate deaths.
His blood is washed off the streets in the winter rain
and drained in the sewage that shares
the common filth of the two nations.

Tomorrow my father will cross the border again
to go work for a bad-tempered man.
He’s had it, mother tells me over the phone.
They need to get out of there, I think, but never say it.

The paranoia changes hands
as spring comes on early, and I read in the papers
a nation is sending the refugees back
to the country they fled from.
On their way, they stop on the trails
to look for the frostbitten fingers
they lost in the difficult winter of their lives. 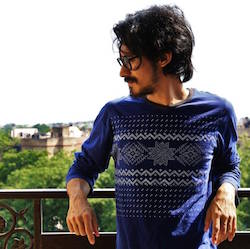 Rohan Chhetri is a Nepali-Indian poet. His poems have been published in Eclectica, Rattle, 34th Parallel, EVENT, and The Antigonish Review, among others, and is forthcoming in Fulcrum. He has won the The Great Indian Poetry Collective's 'Emerging Poets Prize 2015', RædLeaf Poetry India Award 2013, and the TFA Award 2014(Writing) for his poems, and was recently nominated for the Best New Poets 2015 anthology. He was a Toto-Sangam Fellow at the Sangam House International Residency (2014-15). He is currently a University Fellow at the Graduate Creative Writing Program in Syracuse University. Website: rohanchhetri.com