Raqib Shaw and the Nostalgia for Paradise 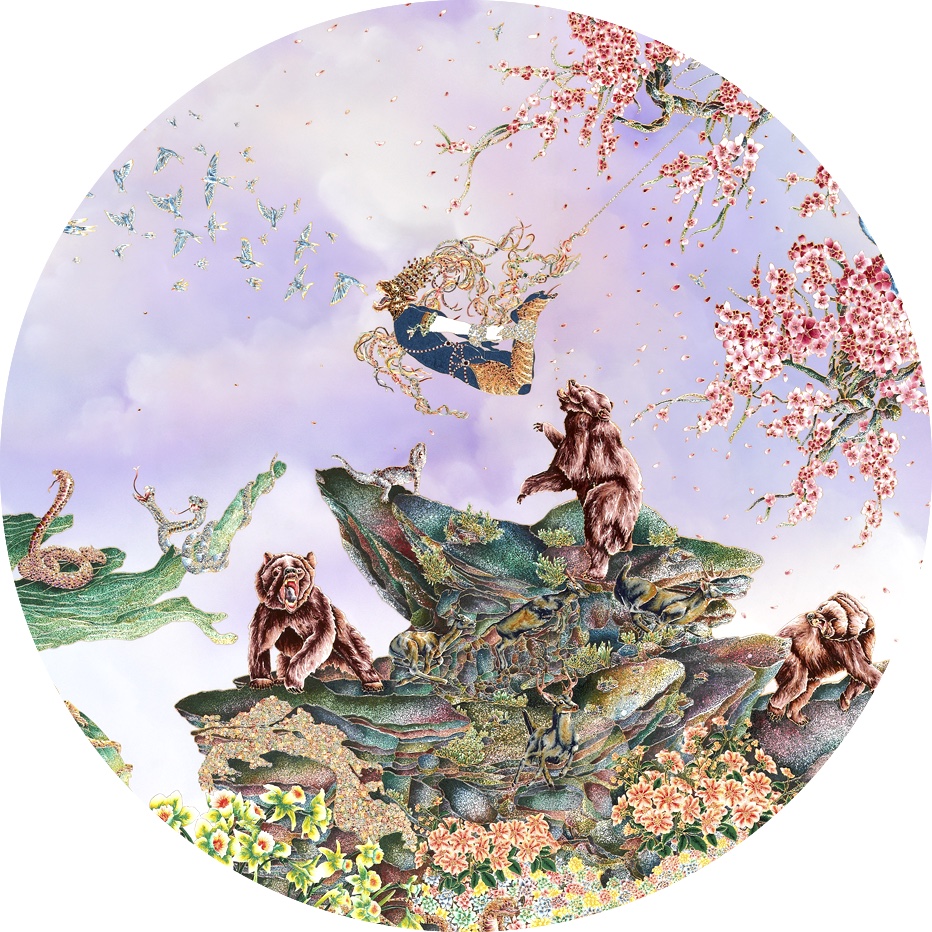 Born in 1974 in Calcutta, Shaw grew up in a mercantile family in Kashmir in the 1980s. Following intense political unrest, his family relocated to Delhi in 1992. In Delhi, Shaw worked with his maternal uncle in the family business dealing with with Kashmiri shawls, jewelry, antics and carpets. Both the opulence and the haunting turmoil of his Kashmiri heritage find their way into Shaw’s work. However, Shaw moves beyond his heritage to his training, to artistic practices from across the world to develop a highly sophisticated aesthetic sensibility.

Shaw’s approach to painting is both an avowal and a disavowal of a world laced with and heavy with history. One can understand it as a playful re-composition of history into one’s own artistic sensibility. In an interview on his 2013 Galerie Rudolfinum exhibition in Prague with Vernissage TV [1], Shaw describes oil as a medium, “extremely loaded with history,” while his own use of industrial paint as an “accident,” that resulted from his inability to afford more expensive material. But Shaw doesn’t shy away from classical materials like oil paint but insists in deploying them in a way that they converse with household paints and materials like Hammerite.

Shaw relationship with the materials as well as the techniques of classical art is not that of mere emulation but that of redeployment for the development a new visual language. Shaw’s mythical beasts, drawn from Persian, Hindu, Greek, Roman and East Asian mythology, romp around violent and sexual in flamboyant landscapes. The backdrop changes from the ornateness of Holbein’s Tudor portraits, to the minimalism of colonial nature painting to the angular structural framing of Piranesi’s paintings of Rome. Homi Bhabha calls Shaw’s art a “bricolage of artistic traditions and individual styles.”  [2]

Particular to Shaw’s work is the deep contrariness in his art. The use of inexpensive and precious materials in the depiction of the ornate and quaint that is equally horrific and ghastly works together to create a world that is rift with tension. Shaw’s more recent work is called “Paradise Lost,” [3] and consists of a series of paintings including the 300 × 900 cm title painting which is Shaw’s biggest painting and the artist’s ode to his childhood.

“Paradise Lost,” takes the viewer through travails of a lone figure, a lion king of sorts who howls at the moon beside a world. Viewers witness a carnage as a day breaks and embarks on a journey from the aspirations of the lone king- figure who howls at the moon along with a wolf before the bitter moon to the natural carnage as the dawn breaks. The image suggests a movement from north to South where the South signifies experience and a full blossoming, perhaps of the “self.” If paradise means anything for Shaw, it is a fantasy of a return to the state of innocence. The reverse journey, from experience to innocence—a movement from the opposite end of Shaw’s painting—would be equally harrowing and horrific. Shaw is anything but naïve about the trappings of nostalgia. The very extent to which innocence and beauty prevailed in the beginning is questionable. What the painting does suggest however is the strong tenor of the impulse to continue, to move.

The conversation between form and content is critical to the making of stimulating art. Shaw’s paintings are titillating precisely because the intricate detailing, the use of particular materials and the depiction of opulence, the debauchery and natural imagery converse in ways that open up the world of the artist’s imagination to the audience. The dialogue between the mythical, fantastical, the horrific and the opulent all create deep tensions and suggest deep seated anxieties in Shaw’s work. It is the anxiety and the tensions that make the artist’s work all the more desirable.

Ajapa Sharma is an editor at Mithila Review. You can find her on Twitter: @Ajapa_Sharma.