The idea for this triptych of poems was conceived when Layla, Holly, and Bonnie spent an evening at Santa Monica Pier in LA, where they had their futures foretold by a fortune-telling machine. Each writer’s poem is directly inspired by her fortune, borrowing words, phrases, and themes.

You emerge from Pacific fog alongside sailboats and
sorrowful ghosts. Your sea legs, the jumble of them, are boneless
and tentative, feeling their ways onto my sand and rock skin,
a slippery home to clusters of mussels and small, many-colored crabs
that twitch and hum upon your arrival. I am unwilling to remember
what made you. Ignoring past sacrifices allows present treasure to appear
so much more auspicious.

Your shape changes by the hour. By noon, your malleable
morning body has become all wood and gears. Mechanical
teeth interlock with my fingers, drag me up and outside
myself. I play at bravery, pretend I have no reason to fear
you, that you would not chew me up at my first misstep, my first
glance down. I ride the Ferris wheel of your spine into the twilight hours.

At dusk you are a vine. With tendrils tight around my feet, I fling
the anchor of my body at the horizon. Overconfident, I
pay no mind to finding a way back to land. As my fingertips
graze a drowned pink sun, you reel me back in. My body has given up
on regenerating lost heat. Soft, heart-shaped leaves fold me into a cocoon,
a briny delicacy. I rest.

By midnight you’ve exhausted your form; you’ve become
the fog from which you rose. I beg the moon that I may keep
you, but I know we drank each other dry. The tide goes out. The ghosts
return to their graves. Crustaceans settle into damp crevasses.

When the surf calms, the world becomes solid again. I will dig up old
friends and lovers from beneath the sand. I will tell them nothing
of you and of how you held my hand as I sliced pieces from my thighs
and belly and fed them to the sea, so that it may grow more of you to visit
more of me.

A thousand years return
again to the people of fortune.
They worship at the dusty altar
of their God, Zoltar, laden with coins
and paper talismans, safe within the pyramid
of fine-cut glass. In his marble eyes they see the dusk
of infinite health. Winds rising, almond-scented,
carry their wild hearts to a place of wealth—
New California, the boardwalk slick with rain,
a metropolis of better benedictions and salt-soaked
memory. They cut bridges into nameless hills,
appellations long forgotten by the people of fortune,
who adorn them in holly, white-painted trunks
and red-berried bushes pricked with blood. They construct
billboards out in the sea, painted allegories adorn their
facades, hawking sex and sentiment to the opulent, the fortunate
of the people of fortune, who bury their dead in the sand where
the light of heaven is closest at dawn, and farther and farther away
at twilight. How dark the beach lies in their sunken eyes, how sallow
their skin even as they bake below the sun, broiled, turning over and
over again, seeking a cool swath of land. Jazz-bands march them to eternity,
the final ceremony. Three days of riots sink the city into chaos and waves and finally
Zoltar speaks, lifts the veil of glass, his hollow body soars, his voice echoing earthquake
blessings.

The crystal gazer stumbles off her train
into an infantry
of foliage. She’s traveled nine years,
two past the year every fairy tale taught her
she should travel,
years of sand dotted with dying trees,
limbs mangled like legs that haven’t walked
a good mile in a good while, trees viewed
from the arch of observation car windows
letting in so much sun her skin scarred
pink by the end. In a sleeper room,
she tossed and turned with despairing fever. Now
she arrives at last
in a land where she knows no one
by their bones like she knew the bones of dead trees.
Everything is green now. Now
her once-still ball spins in her pocket, draws
those loyal waiting into her orbit:
green buds soon to bloom, a rosebush,
a raised bed of tomatoes and peppers
and all the desert fruits: armed forces
of flowering beasts. They offer her anything
she might want. She kneels at their roots, takes their leaves
into her mouth, and drinks the calm water from their grooves
until she breaths again. Ah, she says,
through a mouth full. The fever has fled.
The train has stopped. The body has been rewarded
for its patience. 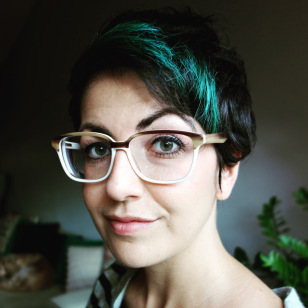 Layla Al-Bedawi is a poet, writer, translator, and bookbinder (among other things). English is her third language, but she's been dreaming in it for years. Her work is featured or forthcoming in Strange Horizons, Liminal Stories, Fantastic Stories of the Imagination, Bayou Magazine, and elsewhere. Originally from Germany, she now lives in Houston, Texas. Find her at laylaalbedawi.com and @frauleinlayla.
Holly Lyn Walrath 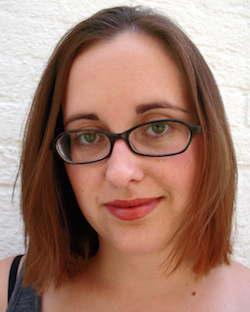 Holly Lyn Walrath wrangles writers as a freelance editor and volunteers as the associate director of Writespace, a nonprofit literary center in Houston, Texas. Her poetry has appeared in Abyss & Apex, Liminality, and Kaleidotrope among others. Find her online at hlwalrath.com.
Bonnie Jo Stufflebeam 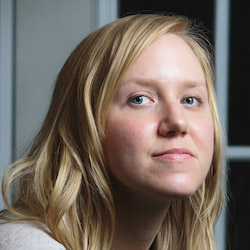 Bonnie Jo Stufflebeam's fiction has appeared in magazines such as Clarkesworld, Lightspeed, and Beneath Ceaseless Skies. She lives in Texas with her partner and two literarily-named cats: Gimli and Don Quixote. She holds an MFA in Creative Writing from the University of Southern Maine's Stonecoast program and curates the annual Art & Words Show. You can visit her on Twitter @BonnieJoStuffle or through her website: www.bonniejostufflebeam.com.