The Saint Of Small Things, Weeping

Poison has always been the old enemy and usual culprit.
Hunting, sometimes, though not as often anymore:
stones, traps, snares, guns. The crunch, the blood. Best
if quick, to fill some other stomach. Worse for sport,
worst for no discernible reason. Huge cars hurtling
down the freeway, electric wires, the random, gentle

killing of those who are not wanted — better a quick death
in the jaws of a hungry animal. The saint of small things
stands by the road and weeps, he is a haggard rat-eyed thing
with papier-mache wings, he has a coyote howl and a fragile
rabbit heart, he is not ever invoked or prayed to, has no power,
only must stand and shake and witness. We created him

but he is not ours. He has his comrades: the saint of whales
lumbering through the darkness with their strange languages
and rumbling loneliness, the saint of bison whose ghosts stretch
across the plains into infinity, the saint of elephants who are said
to remember the names of all their dead. But these are large
losses: too huge to ignore or dismiss, we feel the hole of them

of the inconsequential and unwanted, those commonly
classified as vermin, or else pests. He is the patron saint
of armadillos and arachnids, squirrels, rabbits, rats
and of course mice, sometimes cats, small dogs.
Also ants, though, creatures that can lift a thousand times
their weight in unison, also cockroaches, indestructible,

resilient beyond the last possible mechanism of death.
The saint of small things weeps, dies, weeps, and is born
a hundred times again, and the glint in his eye is as ugly
as a beetle and as beautiful in its sharp, glittering, inhuman shine.
The small things have no language and no history but their memory
is blood-deep and eons old, and it is a short and sweet

and brutal thing. Their children are nursed on it. The hives
and homes of squirming insects hum it in their sleep.
The saint of small things weeps by the roadside, he aches,
he burns, but his teeth are sharp and his soul is hungry. He knows
that his people are resilient, a many-headed and uncaring monster,
they will swallow us in our sleep and remain long after we are gone. 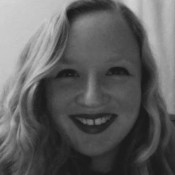 Margaret Wack is a writer, poet, and classicist whose work has been published in Strange Horizons, Liminality, and Twisted Moon, among others. She enjoys dead languages, bad weather, and innumerable cups of tea. More can be found at margaretwack.com.