For Sara Cleto and Brittany Warman

The sisters parted
once the gifts were given.
No need now to thread their lives
through a single needle;
each had her own path to stitch.

The younger one loved spring best
so her work spilled grape hyacinths
into the winter meadows,
made blue waves swim
onto the white cloth of frozen rivers.
From her needle bloomed larkspur,
columbine and the tendrils of sweet pea
curled like napping mouselings.

She embroidered rainfall,
never harsh and pelting but
silver droplets,
and beaded moonstone dew
onto the morning grass.

The elder preferred the forest
by night.
She stitched moss
out of shadow-threads
and gifted golden eyes
to the hunting owls.
Her needle pricked new stars
in the fabric of the sky
to light the trails of wolves.

Will-o-the-wisps and witches
blessed her for her subtle shadings,
pewters and slates
silvering the sables.
She threaded fox-bark and bat-cry
to make hammocks
for the lunar moths,
embroidered dreams
for the elms and oaks,
who sighed in their sleeping,
rustling leaves in canine frenzy
as they leaped and loped
free of their roots.

The sisters never met again,
but the elder smiled to find
crocuses shining like a ring of lamps
around her midnight thicket,
the younger rejoiced at the canopies
of Spanish moss sewn amongst
her plum blossoms. 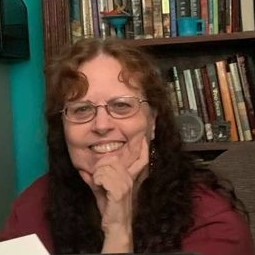 Sandi Leibowitz is a singer and newly-retired children's librarian living in New York City. She is the author of Ghost Light, a quarantine journal in verse, and two speculative collections, Eurydice Sings and The Bone-Joiner. Her work appears in Verse-Virtual, Spillwords, Uncanny, Corvid Queen, Ellen Datlow's Best Horror of the Year 5, Metaphorosis, and other magazines and anthologies. Her speculative poems have won second- and third-place Dwarf Stars, and been nominated for the Elgin, Rhysling, Pushcart Prize, and Best of the Net awards. She is the founder and editor of Sycorax Journal and Sycorax Press.