Salik Shah: How did the anthology The Gollancz Book of South Asian Science Fiction come about? Are you associated with a publishing house or was this a cold pitch?

Tarun K. Saint: Ah yes, the origin of the idea. Well, I have always felt that Indian, and for that matter South Asian SF had not received its due, despite some good work appearing, especially in the last few years. I had previously focused on the past, with my research on the Partition and its representation in literary form. I thought it might be interesting to invite writers of SF to speculate about what India, and eventually South Asia might look like in 2087. So the concept note was sent out, initially to Indian writers, both established and upcoming, and later to some from Pakistan and Bangladesh (at the time I was unable to contact writers from other S. Asian countries). I am not associated with a publishing house—the book proposal was next pitched to Hachette India, who liked the idea. Eventually, the book became an omnibus concerned with both the history of the genre, with sample SF stories in translation, as well as contemporary writing in various registers, including speculative poetry. Gollancz stepped in once they confirmed the material we had brought together was up to the standard set for SF narratives appearing under their imprint internationally.

Salik: What was the biggest challenge as an editor? Could you take us through your editorial process?

Tarun: Outreach to a fair number of SF authors was a major challenge, given that this was my first foray in the field. I had to make the transition from being a scholar and former teacher of mainly Western SF to the role of an anthologist of South Asian SF, quite a challenge. I had the good fortune of receiving the capable guidance of Manjula Padmanabhan, who is an accomplished veteran writer in the field, as editorial adviser, besides the in-house editors at Hachette. So we sent out the concept note to writers already established in this domain, as well as writers who were willing to try their hand foreseeing the future in SF mode, and awaited contributions six months down the line. Then came the task of winnowing the varied contributions and narrowing down to the final selection, while also ensuring that all the chosen pieces were as good as could be through careful editing and dialogue with the authors/translators. Quality was the watchword, within the available options, as well as originality to the extent possible.

Salik: What are some of the best responses to The Gollancz Book of South Asian Science Fiction that you’ve received so far?

Tarun: Always difficult to pick favourite reviews, but I was elated that several reviewers identified and praised the thrust towards ‘literary’ SF, as in the case of Pratik Kanjilal’s review. It was also a delight to meet young readers of the volume at the Bangalore Literature Festival, who seem to have read the collection with great interest and curiosity. Bangalore has become quite the hub for SF, in no small measure as a result of the efforts of SF columnist Gautham Shenoy, who helped set up four SF panels at the Festival in 2019. Of course, as an attempt to open up a field of creative expression to a new readership, there were bound to be some gaps and shortcomings in this initial effort, which I hope the next volume will rectify to an extent.

Salik: I was very happy to see the English-Italian anthology of Indian science fiction, Avatar अवतार: Indian Science Fiction (Future Fiction Vol. 79), co-edited by you and Francesco Verso. Chaitanya Murali reviewed the book for us here on Mithila Review. Could you please tell us about the project?

Tarun: As I understand it, Future Fiction is a series showcasing superlative SF from different countries, initiated by Francesco Verso, at first mainly for an Italian readership. He got in touch with me about the possibility of a special issue on Indian SF. I suggested the idea of a bilingual edition, with mainly original stories, and he readily agreed. I’m sure Francesco will share more details about the philosophical vision of Future Fiction, which underlay the list of themes suggested to authors in the concept note sent out. This included, among others, a focus on SF’s transformative role in negotiating changes ushered in by digital world and social media, as well as the advances in biotech and surveillance mechanisms augmented by technology, besides the perils of climate change. We were really pleased to get thoughtful and incisive creative reflections in response to the list of themes sent out.

Salik: Are you planning any foreign or regional-language edition of the Gollancz volume? Do you feel that India is ready for SF in translation in regional languages? Any data that you can share with us regarding the market for speculative fiction in India?

Tarun: Let us see—there may be a UK edition, with luck. As far as India’s readers are concerned, it is difficult to say for me, without a close acquaintance with regional contexts. Certainly Bangla and Marathi readers are more likely to be receptive to SF in translation, given the longstanding SF traditions in these languages. We need a bit of adventurousness among editors and publishers! As far as the market goes, Bangalore seems to lead the way, with its tech-savvy readers—we have a long way to go in north India, though signs of change are evident in the response to recent SF publications.

Salik: When did you start reading speculative fiction? What draws you to the genre/s?

Tarun: Quite early, I would say, though under the rubric of science fiction at the time. The inquisitive attitude and willingness to bend borders and envisage alternative futures are the attractive aspects of the genre, though at times banality can set in.

Salik: Who are some of your favorite Indian speculative writers?

[Editor’s Note: You can read the reviews of Vandana Singh’s latest collection Ambiguity Machines and Other Stories and S.B. Divya’s short story collection Contingency Plans for the Apocalypse here and here on Mithila Review. A big shout-out to Ishita Singh and Gautam Bhatia for their excellent work.]

Salik: You’re also a writer. What are you working on these days? Is there a speculative novel in the works?

Tarun: Still thinking about ways of expanding a story I had written some time ago, which may become a longer narrative in time.

Salik: You are planning a sequel to the Gollancz anthology. When can we expect to see it?

Salik: Any other projects that we should look forward to?

Tarun: All in good time—I have been thinking about the genre of magical realism recently. 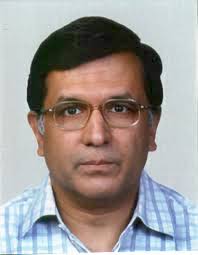 Tarun K. Saint, an independent scholar and writer, was born in Kenya, and has lived in India since 1972. His research interests include the literature of the partition and science fiction. He is the author of Witnessing Partition: Memory, History, Fiction (2010), based on his doctoral dissertation. He edited Bruised Memories: Communal Violence and the Writer (2002) and co-edited (with Ravikant) Translating Partition (2001). He also co-edited Looking Back: India’s Partition, 70 Years On (2017), with Rakhshanda Jalil and Debjani Sengupta. Recently, he has edited The Gollancz Book of South Asian Science Fiction (2019). The bilingual (Indian-Italian) SF anthology 'Avatar: Indian Science Fiction' , ed. Francesco Verso and Tarun K. Saint, appeared in January 2020.
Salik Shah